Syria Hearing: Secretary Kerry Refuses to Rule Out Use of U.S. Ground Troops 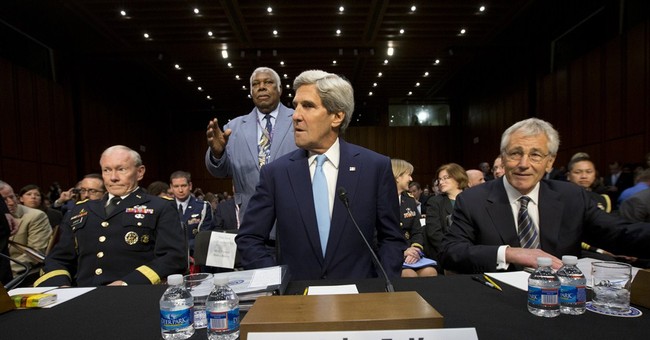 Secretary of State John Kerry’s refusal to rule out the use of U.S. military forces on the ground in Syria shook the otherwise supportive Senators during Tuesday’s hearing on the ‘Authorization of Use of Force in Syria’.

The hearing -- held by the United States Senate Committee on Foreign Relations -- questioned Mr. Kerry, Secretary of Defense Chuck Hagel, and Chairman of the Joint Chiefs of Staff General Martin Dempsey on the President’s proposal to use “limited force” against Syria as a direct response to the Regime’s use of chemical weapons.

Senator Menendez, the Chairman of the committee, delivered the opening remarks and declared his support for President Obama’s proposed plan:

“I support the President’s decision to use military force in the face of this horrific crime against humanity.”

“Are we so tired of war that will are willing to silence our conscience?”

Over the course of almost four hours, Kerry, Hagel and Dempsey took turns arguing that a military strike against the Syrian regime was necessary to preserve U.S. national interests and credibility, and to protect the safety of U.S. allies in the region.

In an effort to ease skeptics of the chemical attack, Kerry was adamant that the Regime’s use of chemical weapons had been proven by intelligence “beyond a reasonable doubt”:

“We can tell you beyond any reasonable doubt that our evidence proves that the Assad Regime prepared for this attack…we have physical evidence of where the rockets came from and when. Not one rocket landed in Regime-controlled territory.”

Kerry went on to assert that the Syrian Regime’s use of chemical weapons and the instability of the region was a direct threat to U.S. national interest and required immediate action:

“We have allies there…we have deep interests there.”

We need “to avoid the creation of a safe haven in Syria or a base of operations of extremists to use these weapons against our friends.”

Hagel echoed Kerry’s statements by asserting the need to preserve “international norms” in terms of warfare and the treatment of civilians. He warned that breaking treaties like the Chemical Weapons Convention would “embolden other regimes,” like Iran or North Korea, “to acquire and use chemical weapons.”

“The word of the United States must mean something,” he declared.

General Dempsey was unwilling to publicly answer questions regarding the military tactics being considered for the strike, but he made clear that the objectives given to him by the Commander-in-Chief were to “deter” the Syrian Regime from any further use of chemical weapons.

The majority of Senators on the committee, including Chairman Menendez, were in favor of a limited attack on the Syrian Regime based on humanitarian grounds. However, Secretary Kerry’s unwillingness to rule out the use of U.S. military troops on the ground in Syria raised questions from both skeptics and supporters.

When asked to include a provision in the authorization that would prohibit the use of U.S. military troops on the ground, Kerry was willing to pledge the President’s promise not to use troops, but he was not willing to propose an amendment:

“I don’t want to take off the table an option…to secure our country.”

Later in the hearing, Kerry clarified his statement to say that “President has no intention…to put American troops on the ground, in the fighting of this civil war. “ It was noted by several Senators, however, that this clarification still leaves an opening for the use of troops to protect the United States’ ‘national interest,’ which had a broad and open-ended definition.

The Secretaries and General met some opposition from Senators who remained unconvinced that a military attack on the Syrian Regime would ensure a desirable outcome. Senator Marco Rubio stated that the drawn-out decision to intervene in Syria has left the U.S, “with options, all of which are less than ideal.”

He raised concerns that Assad and his Regime would weather the “limited attacks” and claim victory once they ended; General Dempsey responded by suggesting that any military strategy would have further military attacks prepared in case Assad tried to claim victory; only furthering Rubio’s worry that the attacks would not be as “limited” as the interventionists claim.

Senator Rand Paul pressured Secretary Kerry to ensure that the vote of Congress would direct the actions of the President and would not be for symbolic purposes only:

“Only if our vote is binding is it meaningful,” he concluded.

Kerry claimed he was unable to make a promise on behalf of the President, which only pushed Paul’s skepticism further, generating a heated debate between the Secretary and the Senator over the ability to ensure the military attacks lead to a desirable outcome.

“Will the region be more stable or less stable,” Paul demanded to know. The Secretary assured Paul that the region would be more stable after U.S. military intervention, though Paul clearly remained unconvinced.

Though the majority of the Senate committee seemed to support U.S. intervention in Syria, the debate is far from over. When Congress reconvenes on September 9th, both the House and the Senate with debate the potential consequences of a military strike against Syria. With the President and the public opinion split, the vote for intervention could swing in either direction.

WH Press Sec. Kayleigh McEnany Flattens Jim Acosta in Epic Exchange Where He Accidentally Reveals His Bias
Redstate
Chris Hayes: Why did police use tear gas against BLM protesters but not against re-opening protesters? (Update)
Hotair