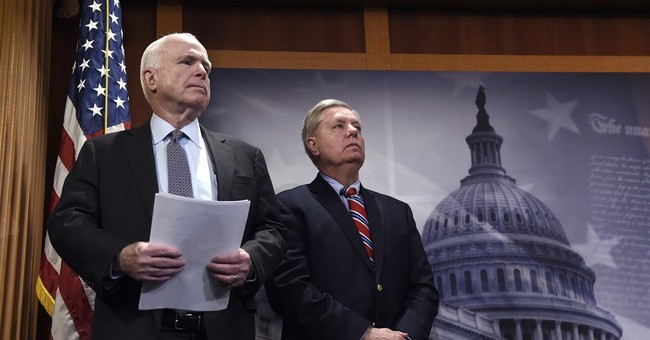 Three lone Republicans voted in favor of keeping an Obama administration regulation that limited methane emissions from oil and natural gas drilling sites on Wednesday, according to The Hill.

Republican Sens. Lindsey Graham (SC), John McCain (AZ), and Susan Collins (ME) along with all 48 members of the Democratic Party joined together in an alliance to defend Barack Obama's regulation.

“While I am concerned that the BLM rule may be onerous, passage of the resolution would have prevented the federal government, under any administration, from issuing a rule that is ‘similar,’ according to the plain reading of the Congressional Review Act,” McCain said in a statement.  “I believe that the public interest is best served if the Interior Department issues a new rule to revise and improve the BLM methane rule.”

Therefore, Republicans who voted in favor of the removal will ask Interior Secretary Ryan Zinke to act instead.

“This was a very duplicative, unnecessary act of government interference in an area where BLM had no authority,” Senator John Barrasso of Wyoming said.  “It was over-regulation by the Obama administration, and we tried to remove it with the Congressional Review Act. That fell one vote short today, and as a result we’ll call on the secretary to withdraw it.”