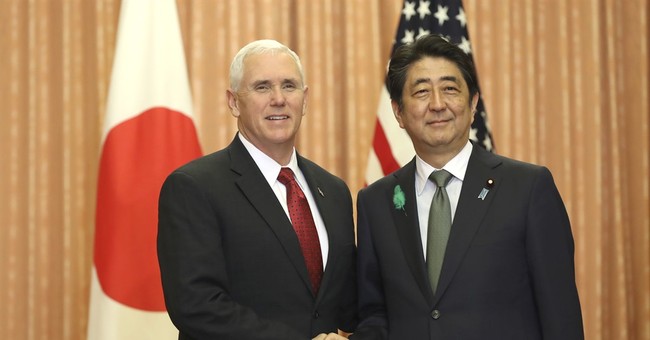 As tensions continue to mount in the Korean Peninsula region, Vice President Mike Pence made it clear to Japanese Prime Minister Shinzo Abe on Tuesday that the United States stands behind their decades old ally and will continue to work on resolving North Korea's provocations.

"We appreciate the challenging times in which the people of Japan live with increasing provocations from across the Sea of Japan," Pence said. "We are with you 100 percent."

During his tour of the Asia-Pacific, Pence assured the Japanese people that the "era of strategic patience is over" on Monday.

"President Trump has made it clear that the patience of the United States and our allies in this region has run out and we want to see change," Pence said. "We want to see North Korea abandon its reckless path of the development of nuclear weapons, and also its continual use and testing of ballistic missiles is unacceptable."

"Gotta behave," he said when questioned by the media at the annual White House Easter egg roll.  And when asked about his next move, the president said, "You'll see."