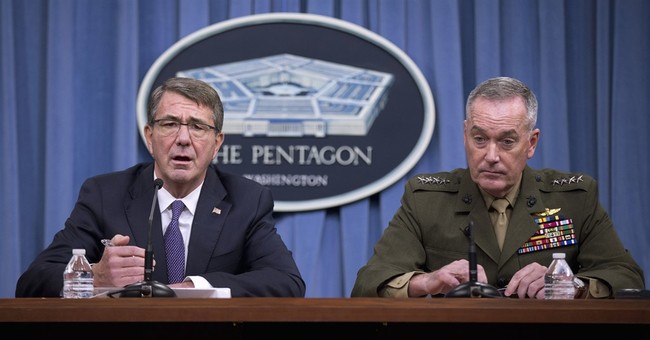 Thousands of U.S. troops who have deployed in support of the mission against the Islamic State in Iraq and Syria, or ISIS, are set to receive a new medal, Pentagon officials announced on Wednesday.

“It is fitting then, that as we mark the change of command between these two leaders, that we introduce the Inherent Resolve Campaign Medal,” Carter said. “I am pleased to announce today, by the president’s order and upon the chairman’s and my recommendation, that our sailors, soldiers, airmen, and Marines serving in Iraq and Syria as part of Operation Inherent Resolve are now eligible for this medal and distinction.”

Barack Obama on issued an executive order establishing the medal to service members who "serve or have served in Iraq, Syria, or contiguous waters or airspace on or after June 15, 2014."

The award is retroactive to June 15, 2014, and is for service members based in Iraq or Syria, those who flew missions over those countries, and those who served in contiguous waters for 30 consecutive days or 60 nonconsecutive days, officials said.

With the operation still ongoing, an end-date for medal eligibility has yet to be established.