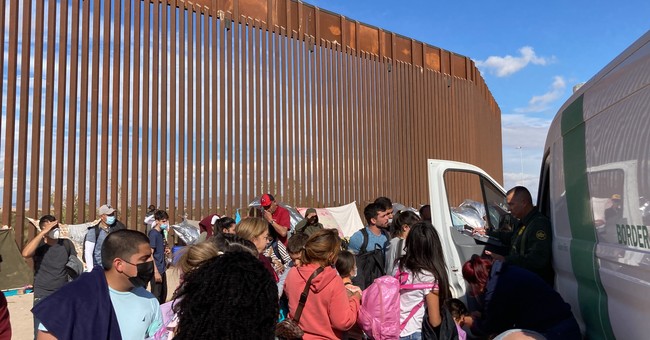 House Democrats once again blocked a GOP bill, H.R. 471, on Wednesday, which would prevent the Biden administration from prematurely lifting Title 42 and from weakening the public health order's scope amid the historic crisis at the U.S.-Mexico border.

Title 42 enables Border Patrol to rapidly expel illegal immigrants caught at the border from spreading COVID-19. Critics of the order say it denies people the chance to seek asylum while not attaching any punishments to deter future illegal crossings.

Prior to the vote, Congresswoman Mayra Flores (R-TX), who represents part of the Rio Grande Valley, argued on the House floor why Title 42 needed to remain in place.

"Title 42 is one of the only things keeping the crisis at the border from getting even worse, allowing border patrol the flexibility to expel some illegal immigrants quickly," Flores said. "And yet, for some inexplicable reason, President Biden and the Democrats want to end Title 42 for good. Doing this would put out an even larger welcome sign to drug, sex, and human traffickers...As a border patrol wife, I also know that the morale of our agents is already low."

"Eliminating Title 42 would discourage those brave men and women even further as they struggle to contain the never-ending surge of illegal immigration that the Biden Administration is trying to make even worse," she added.

The Department of Homeland Security initially planned to end enforcement of Title 42 in late May but was stopped by a federal judge. While the order is still technically in place, the Biden administration has applied it to fewer and fewer nationalities. Out of the over 200,000 people who illegally crossed the southern border in May, 100,699 were removed from the U.S. under Title 42.