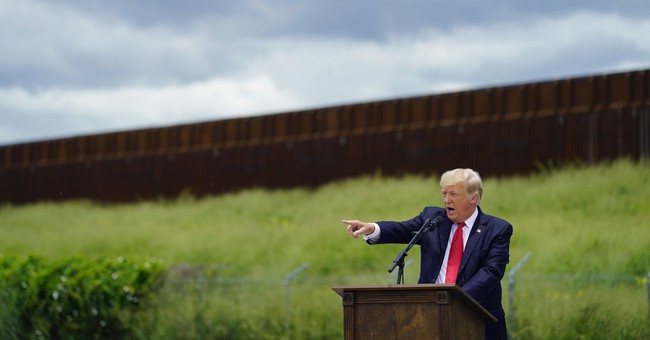 The Biden border crisis has claimed many lives of illegal immigrants during the historic surge in crossings as the current administration has done everything in their power to incentivized people to come to the southern border.

Just these past weeks in the area around Eagle Pass, Texas, multiple illegal immigrants have drowned as they attempted to cross the Rio Grande. Fox News National Correspondent Bryan Llenas recently witnessed a man drown in a popular crossing spot.

*Graphic Video*: A 38 yr-old Nicaraguan man drowned while trying to cross the Rio Grande River into Eagle Pass Texas. Video show his friend holds onto a pillar. National Guard was there. Guardsman told me they’ve been ordered not to do water rescues after SPC. Evans drowned. pic.twitter.com/VWxXW5RrmP

The Washington Post published a story last week that highlighted the growing number of deaths...stemming from the border wall system built under former President Donald Trump because it is manmade:

"Since 2019, when the barrier’s height was raised to 30 feet along much of the border in California, the number of patients arriving at the UC San Diego Medical Center’s trauma ward after falling off the structure has jumped fivefold, to 375, the physicians found. Falling deaths at the barrier went from zero to 16 during that time, according to the report, citing records maintained by the San Diego county medical examiner."

"Migrants attempting to evade capture have drowned in the Rio Grande, died of exposure in South Texas and Arizona, and disappeared into the Pacific Ocean during smuggling attempts at sea. What’s different is that the border wall is a man-made obstacle that poses a lethal danger and public health challenge where one did not exist previously."

In addition to the increase in deaths, there has been an increasing number of injuries when a person falls off the wall and survives. To be clear, it is sad when people die trying to enter the United States. It makes it even sadder when the deaths are the result of those same people being incentivized to come by the United States government when they should be focused on deterring illegal immigration.

Maybe they shouldn’t be climbing over it in the first place… https://t.co/rm3M89HnGD

Ummmm, so you want us to feel bad for people illegally breaking into this country? I say we tack on 10-15 ft minimum. https://t.co/mMm5c9fDqy

WaPo is horrified that about 10 people a month get hurt falling off the wall...

The press is finally looking at the border crisis…but just to criticize Trump https://t.co/oGMvtc5ORS