Biden Met with the Pregnant Widow of a Marine Killed In Kabul. It Did Not Go Well. 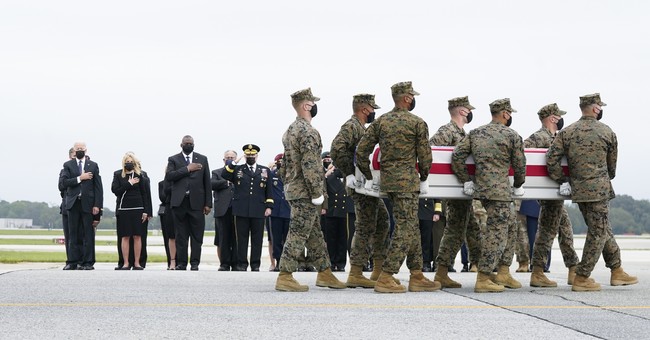 President Joe Biden attended the dignified transfers of the U.S. service members at Dover Air Force Base on Sunday, with the family members in attendance. After the ceremony, Biden met with some of the families but according to the Washington Post, one meeting did not go well.

The service members, who were comprised of Marines, a Navy Corpsman, and a soldier, were killed on Thursday after a suicide bomber and gunman attacked the Abbey gate at  Hamid Karzai International Airport. Over 100 Afghan civilians were also killed in the attack.

The family of Lance Cpl. Rylee McCollum — his sisters, his father, and McCollum's wife, Jiennah McCollum — were at Dover for the ceremony, but only Jiennah went to meet with Biden as the rest of the family did not want to speak with Biden because they hold him responsible for Rylee's death:

"Only Jiennah, who is expecting the couple's child next month, stayed. But she left disappointed, Roice said. The president brought up his son, Beau, according to her account, describing his son's military service and subsequent death from cancer. It struck the family as scripted and shallow, a conversation that lasted only a couple of minutes in 'total disregard to the loss of our Marine,' [sister] Roice said.

"'You can't f--- up as bad as he did and say you're sorry,' Roice said of the president. 'This did not need to happen, and every life is on his hands.'

"The White House declined to comment on the private conversations Biden had with families."

The McCollums' reaction tracks with what I was told from sources close to some of the Gold Star families, who said more than one of the families did not even want Biden to attend the dignified transfers.

"You can't have a hasty withdrawal after 20 years of war,"  Paula Knauss, mother of Ssgt. Ryan Knauss, told the Post. "Because it's beyond me. It disgraces the name of all those who have fought in the past and who are now on the ground, foreign ground fighting right now, my son's [82nd] Airborne is still there, and they deserve to be protected."