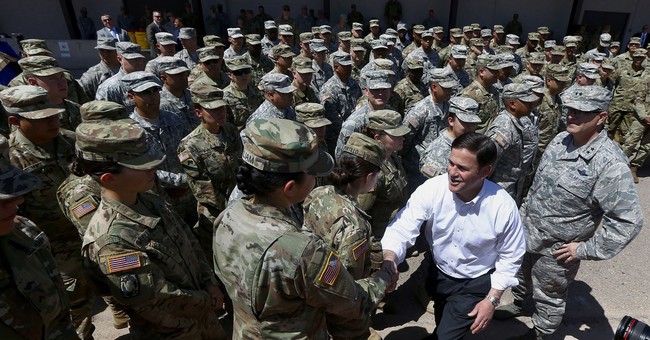 Arizona Gov. Doug Ducey (R) announced on Tuesday he is activating elements of the state's National Guard to address the ongoing crisis at the U.S.-Mexico border, with illegal crossings reaching an all-time high.

"The situation in our border communities is just as bad—if not worse—than the coverage we've been seeing,"  Ducey said. "It's become evidently clear that Arizona needs the National Guard, and the White House is aware of that. Yet, to this day, there has been no action from this administration, and it doesn’t look like they are going to act any time soon. If this administration isn't going to do anything, then we will."

The National Guardsmen who will be partaking in this mission, about 250, will be led by newly appointed Adjutant General and Director of the Arizona Department of Emergency and Military Affairs Brigadier General Kerry Muehlenbeck.

Among their duties, the soldiers will:

"The dedicated members of the Arizona National Guard stand ready to support our local law enforcement partners as they address border security, just like we have done for many years when called upon,” said Muehlenbeck. "Our guard members will tackle a wide range of tasks including medical operations, camera maintenance and monitoring, data analysis, and logistics and administrative support to local sheriffs. I am proud of the men and women of the Arizona National Guard for their commitment to serving and protecting our state, all while they balance federal requirements and full-time civilian commitments. I am grateful for all they do to keep Arizonans safe and for the many employers who continue to support them."

The initial cost of the deployment is around $25 million.

Katie recently returned from the border in Arizona, where the Pinal County Sheriff Office told her that, due to the open border rhetoric and policies from the Biden administration, the negative impact on the desert environment will increase and there will be a return of cartel "rip groups," who try to steal drugs from rival drug smugglers.