Ilhan Omar: The Need to Impeach Trump Is Just Like the Need to ‘Hold a Murderer’ Accountable 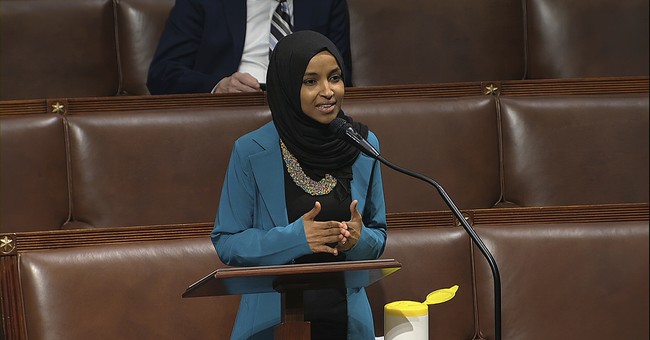 Rep. Ilhan Omar (D-MN) told MSNBC on Tuesday Congress must impeach and remove President Trump because he is responsible for the riot at the Capitol building that resulted in five deaths and many injuries.

Trump is facing another impeachment vote this week as Democrats in Congress say he incited the riot last Wednesday while they were in the process of certifying the Electoral College results, resulting in President-elect Joe Biden's victory permanent.

"I know that some have likened the reaction that we are getting, obviously, from the President and some of, you know, Democrats and some Republicans in Congress, to someone saying, you know, if we were to hold a murderer or someone who has committed violence accountable, there will be more. And to me, it is really the — having consequences for actions that act as a deterrent," Omar said.

"We know that some have said he’s learned his lesson, some have also used childlike analogies to talk about he has put his hand on a stove and he is now burned and he won’t do it again, but this is not just about him,. This is about fulfilling our oath of office. And if we do not take that [seriously], I don’t know how we can continue to be members of Congress and say that we are to protect our country from domestic — domestic enemies," she added.

Omar has been pushing for Trump to face legal consequences for a whole host of other issues, such as his response to the COVID-19 pandemic.

"As you know, I lost my mother on June 16th. I remember my dad was in Kenya. He came back into the United States when COVID hit because he thought he would be safer here and I know that my father and over 300,000 people have lost their lives to COVID because of dangerous criminal neglect by Trump and his administration and I agree with [Congressman] Clyburn that it is not enough for us just to issue subpoenas that. We have to investigate and prosecute these people responsible for these reckless deaths," Omar said in December.