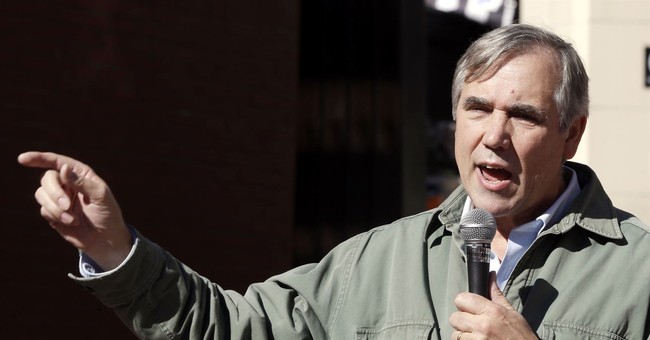 Barr has pointed to how anarchists in Portland, Oregon had rioted for over 100 days before putting a temporary pause due to the wildfires in the state. The groups are planning to continue their actions against local, state, and federal law enforcement once the wildfires are no longer a major threat.

"The Attorney General, Bill Barr, as you know, on this call with prosecutors brought up the possibility of charging violent protesters with sedition, which is a crime to conspire to overthrow the U.S. government. What is your reaction to that?" CNN's Poppy Harlow asked.

"Well, I’m astounded. If people are engaged in property damage and I condemn violence on — on all fronts, they should be charged with property damage, but what I read into Attorney General Barr’s comments is he wants people who are protesting in opposition to the administration to be charged with sedition," Merkley said.

"I don’t know that it’s that clearly laid out but that was the impression I took from it. This is part of an imperial presidency, an authoritarian approach where you undermine the legitimacy of the press. You absolutely make disagreeing with the administration a — a crime, charge them with sedition," he continued. "It’s — I think the Attorney General or the various prosecutors who weighed in and shared that news, they are professionals who were just astounded that our top law enforcement person would — would propose really what is politicizing protest."

When the rioters were targeting the Mark O. Hatfield Courthouse in July, Merkley condemned the Trump administration for deploying extra federal officers to protect the building.

"I will be introducing an amendment to the defense bill with [Sen.] Ron Wyden to stop the Trump administration from sending its paramilitary squads onto America's streets. We won't let these authoritarian tactics stand," he tweeted.

??PLEASE RT: Here are the details of the amendment. Introducing w/ @RonWyden & @ChrisMurphyCT. We already have 12 confirmed cosponsors, representing states all over the country. This isn’t just an Oregon crisis. It's an American crisis. We need to stop Trump before this spreads. pic.twitter.com/jTmvkGpr0m