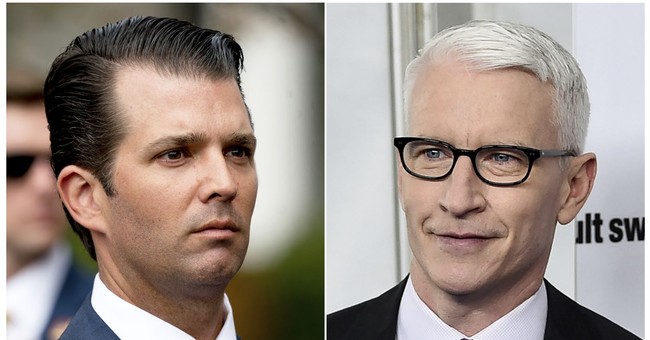 CNN anchor Anderson Cooper took some time after airing his interview with climate activist Greta Thunberg to criticize the people who mocked the network for having her on during their televised town hall on the Wuhan coronavirus.

Cooper specifically targeted President Trump's son, Donald Trump Jr., for joining in on the mockery, comparing them to teenagers putting videos on TikTok every day.

"Apparently someone with a bluecheck on Twitter saw the initial ad and was outraged and claimed we booked Greta Thunberg to be an expert on a Coronavirus panel with other health experts. Of course, Donny Trump Jr. jumped into this. ... Shouldn’t his job be a busy job since it’s allegedly such a great big company? Once DJTJ started typing, then other people with bluechecks on Twitter started doing their thing because everyone has to produce content these days. That’s what it’s all about. It’s like a tween on TikTok. You’ve got to produce content," Cooper said.

Cooper said CNN never said Thunberg was going to be part of an expert panel on the virus, much like other celebrities they have had on in the past, but to talk about her work raising money for the United Nations Children's Fund. He then took a jab at Donald Trump Jr.'s relationship with his dad.

"Look, I get Donny Trump, Jr. attacking CNN and a 17-year-old Swede, that’s like low hanging fruit. It's like paying thousands of dollars to shoot exotic animals on game farm. You know, it’s easy. And I know Donny Jr. just wants his dad to love him or notice him in a way that’s not mocking him," Cooper added.

Thunberg addressed the controversy on Twitter before the interview aired.

"I am not an expert. I am an activist. The only people claiming that I'm an 'expert' are those who are trying to ridicule me. My message has always been to unite behind the science and listen to the experts," she said.