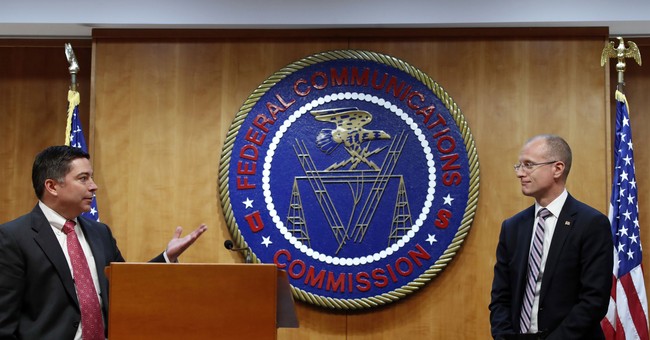 Brendan Carr, who is a commissioner for the Federal Communications Commission, has been using his Twitter account to take Chinese propagandists head-on as the Wuhan coronavirus continues to ravage the world, a result of the authoritarian government failing to contain COVID-19 and being opaque about the virus' true nature until it was too late.

Carr has gotten some name recognition as of late after he asked Hua Chunying, the director of the Foreign Ministry Information Department, to speak with people, from citizen journalists to medical workers, who have disappeared after raising the alarm over the new virus. Chunying had claimed anyone is able to travel to China "anytime and talk to anyone in the streets to enjoy the freedom."

First, I would like to speak with Dr. AI Fen.

She worked at Wuhan Central Hospital and tried to sound the alarm on the virus.

9. @SpokespersonCHN does your offer still stand? Or has it suddenly disappeared as things tend to do over there?

Carr's thread has gone viral, with Chunying not replying directly to him, and he has become one of the latest government officials to publicly rebuke the Chinese Communist Party for their handling of the coronavirus outbreak.

"There's always been sort of a Washington, D.C. foreign policy fight between the 'China hawks' and the 'China doves' and that debate has never really been felt in a very personal way by Americans, in large numbers, outside of D.C.," Carr told Townhall.

"That has changed with COVID-19. So many Americans across the country now are having their lives disrupted because of the oppressive nature of the Chinese regime...So I think for the first time in a really visceral way, Americans are feeling the consequences of the oppressive regime," he said.

Carr, who has been a commissioner of the FCC since 2017, noted the Chinese government has kicked their propaganda machine "into high gear" in an attempt to save face or shift blame from their massive failures, such as blaming the outbreak on the U.S. military.

The CCP's misleading propaganda about the coronavirus pandemic is not the first time Carr has had to grapple with their propaganda. With the expansion of the 5G networks, Carr said the United States was at "serious risk" in 2015-2016 of being replaced globally with China's 5G networks. While the U.S. is now the leader with 5G, Carr said the FCC has been dealing with companies that are owned by the Chinese government who have grave network security issues.

Some of the same companies are being relied upon by Americans to work from home with the COVID-19 lockdowns, like video conferencing provider Zoom.

"Do you trust companies, to the extent that they are, ultimately beholden to the communist regime? And I think the coronavirus pandemic just shines a brighter light on that. When they're disappearing their own people to hide the truth, that really obliterates any claim that a company, under the thumb of this regime, is going to be trustworthy in U.S. networks," Carr said.

The Department of Justice unanimously recommended last week for the FCC to "revoke and terminate China Telecom (Americas) Corp.’s authorizations to provide international telecommunications services to and from the United States" since "China Telecom is the U.S. subsidiary of a People’s Republic of China (PRC) state-owned telecommunications company" and have failed to "comply with the terms of an existing agreement with the Department."

While Carr has been busy pushing back against Chinese propaganda, he's also had to contend with some calls of censorship from within the United States. The FCC rejected a petition by a leftist group last week to have the government agency implement a sweeping censoring plan for networks airing President Trump's coronavirus task force press briefings.

"What we're seeing is a coordinated campaign on the left, on several fronts, one of which is to try to bully broadcasters in the media into not covering the President's daily coronavirus briefings, or at least, making sure they slant their coverage to towards the orthodoxy of those far-left groups," Carr explained.

"We always want more speech, not less," Carr continued. "Censorship, the shutting down of ideas whether they're false or not, those decisions aren't made from some higher objective authority. Those decisions are made by politicians in power."

One of the consequences of the Wuhan coronavirus lockdown in the U.S. has resulted in people, who are able to work from home, relying on their internet for longer periods of time more than ever. This has shown the FCC's decision to repeal net neutrality in 2017 was correct as U.S. networks had been built up and are more robust to handle the increase of web traffic, according to Carr.

Repealing net neutrality had "absolutely" saved and prepared the U.S. networks for surges the network is experiencing now, Carr said, who also is not afraid to point that out via his Twitter account.

Harold, here’s the data you say doesn’t exist that proves the point you say cannot be made.

America’s Internet infrastructure is outperforming networks in Europe & around the world thanks to a boom in private sector builds since we ended utility-style regulation of the Internet. https://t.co/tbfjYIsmxz pic.twitter.com/0A3UwVUuKD