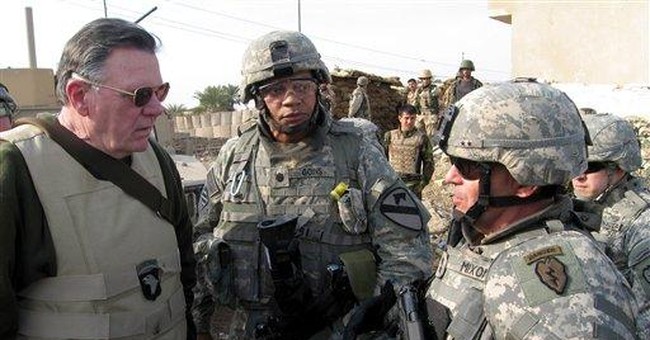 CNN Chief Media Correspondent Brian Stelter took some flak on Twitter when he framed the news of General Jack Keane will receive the Presidential Medal of Freedom as just another voice on the Fox News Channel.

In a tweet, Stelter described Keane as "an influential voice in the Trump White House through his regular Fox appearances. He is the network's senior strategic analyst."

General Jack Keane is an influential voice in the Trump White House through his regular Fox appearances. He is the network's senior strategic analyst. Next week Trump will award him with the presidential medal of freedom https://t.co/uORB3jCJ12

Keane's background is much more storied than Stelter lead people to believe, as evidenced by the White House's announcement:

"General Jack Keane is a retired four-star general, former Vice Chief of Staff of the United States Army, and a well-respected foreign policy and national security expert.  General Keane has devoted his life to keeping America safe and strong, and he has earned many awards, including two Defense Distinguished Service Medals, five Legions of Merit, two Army Distinguished Service Medals, the Silver Star, the Bronze Star, and the Ronald Reagan Peace through Strength Award."

Stelter got an earful from people on Twitter, pushing back on the idea of just highlighting his televisions appearances.

He’s also a retired four-star general and former Vice Chief of Staff of the United States Army. But yeah, this is about FOX News. https://t.co/iiSDEkof9C

Jack Keane is a career military leader who gave decades of service to his country, led troops in combat, was awarded the Silver Star, and helped found one of the most respected foreign policy think-tanks in Washington that has provided valuable advice to both sides of the aisle. https://t.co/t9UaZL5g1J

Always fun to listen to Millennials who’ve never served a day in their lives besmirch the service of one of America’s most decorated veterans in the public arena.

I wonder how @jaketapper feels about his colleagues down playing veterans and service members this way https://t.co/GNm0cNHcBb

Jack Keane also wore the uniform for 35 years and earned the Silver Star in Vietnam and the Legion of Merit five times. But sure, Fox News Contributor is the best way to describe him.

I am honored and overwhelmed by President Trump’s decision to award the Medal of Freedom. I lived a military life among heroes who were and always will be my inspiration. https://t.co/zs6GXpL0jK