NYT Publishes the Taliban's Propaganda About the Ongoing Peace Talks 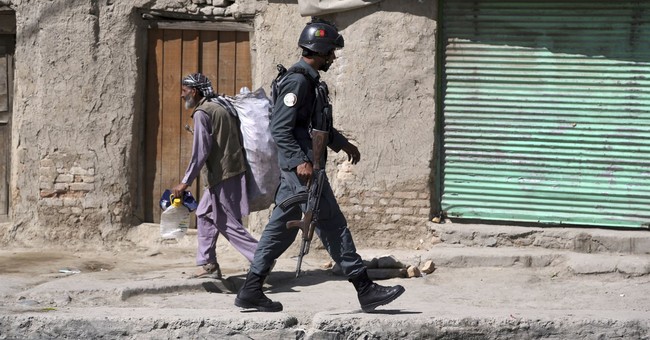 The New York Times published an op-ed on Thursday written by Sirajuddin Haqqani, the deputy leader of the Taliban, to spread his take about the ongoing peace talks between the United States and the terror group.

Haqqani writes his cohorts did not have the confidence of the peace talks resulting in anything less than U.S. military forces leaving the country since previous talks failed to reach any sort of an agreement:

"Nevertheless, we decided to try once more. The long war has exacted a terrible cost from everyone. We thought it unwise to dismiss any potential opportunity for peace no matter how meager the prospects of its success. For more than four decades, precious Afghan lives have been lost every day. Everyone has lost somebody they loved. Everyone is tired of war. I am convinced that the killing and the maiming must stop."

The most serious lie in the op-ed is when the terror leader, who is on the FBI's most wanted terrorist list, says his group did not choose to fight America:

We did not choose our war with the foreign coalition led by the United States. We were forced to defend ourselves. The withdrawal of foreign forces has been our first and foremost demand. That we today stand at the threshold of a peace agreement with the United States is no small milestone."

The U.S. invaded Afghanistan because the Taliban refused to no longer allow Al-Qaeda to operate and train within the country. Due to their safe harbor within Afghanistan, Al-Qaeda was able to plan and carry out the September 11 attacks in 2001.

"We are about to sign an agreement with the United States and we are fully committed to carrying out its every single provision, in letter and spirit," Haqqani continues. "Achieving the potential of the agreement, ensuring its success and earning lasting peace will depend on an equally scrupulous observance by the United States of each of its commitments. Only then can we have complete trust and lay the foundation for cooperation — or even a partnership — in the future."

While of course the Times does not endorse the Taliban's views, it's telling how they catered to a globally designated terrorist with the op-ed. The featured image alone shows a man waving an Afghan flag during an Independence Day celebration in Kabul, instead of say, the aftermath of the Taliban's deadly attacks on civilians.

Haqqani is wanted for questioning in connection with the January 2008 attack on a hotel in Kabul, Afghanistan, that killed six people, including an American citizen, according to the FBI.

"He is believed to have coordinated and participated in cross-border attacks against United States and coalition forces in Afghanistan. Haqqani also allegedly was involved in the planning of the assassination attempt on Afghan President Hamid Karzai in 2008," the agency explains.

Four American services members have been killed in Afghanistan so far in 2020. Sgt. 1st Class Javier J. Gutierrez, 28 and Sgt. 1st Class Antonio R. Rodriguez, 28, were killed on February 8 as they engaged a gunman in an Afghan Army uniform. Staff Sgt. Ian McLaughlin, 29, and Pfc. Miguel Villalon, 21, were killed in January when their vehicle was struck by an improvised explosive device (IED) in the Kandahar Province.