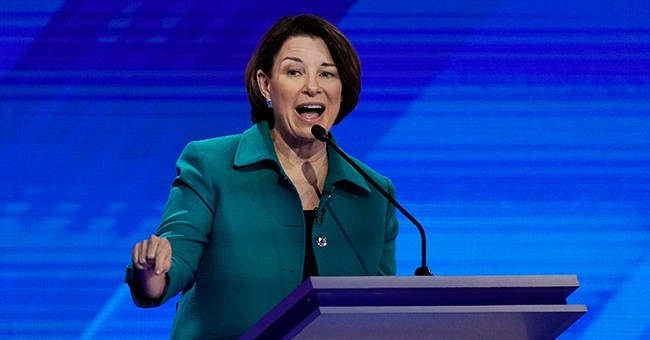 Presidential candidate Sen. Amy Klobuchar (D-MN) explained on Tuesday why she was unable to name the president of Mexico during a recent interview with Telemundo: She had a very busy schedule that day.

Klobuchar and fellow candidate Tom Steyer appeared to not know Andrés Manuel López Obrador was the president of the only country that borders the United States to the south. Former South Bend, Indiana, Mayor Pete Buttigieg was one of the candidates who did know Obrador's name.

Klobuchar blamed the busy schedule she had that day for the flub during her CNN town hall in Las Vegas. She also mispronounced his first name as "Andre" instead of "Andrés."

"I had been in the Senate all day. We had six votes and including a resolution to be a check on the president so he doesn’t go into war with Iran. And I got on a plane and got there at I think midnight my time and had a fast interview and then did two forums after that. I think ending a 2:00 or 3:00 in the morning. So such is life," she said.

Buttigieg took a jab at Klobuchar during his interview, saying it proves you do not need experience in Washington in order to lead the country.

"And I would say to the Mayor, this isn’t like a game of jeopardy. This is about, to me, experience and I have so much respect for him and his experience," she continued. "But my experience is different. I have been in the Senate. I have passed over 100 bills as the lead Democrat. I think that matters. And most importantly, I have been able to win in rural and suburban districts. I have be able to win with independents and Republicans. Not once, not twice, but three times."

Klobuchar then promised to meet with Obrador within the first 100 days of her presidency if she wins.