WATCH: Trump Does Not Shake Nancy Pelosi's Hand at the SOTU 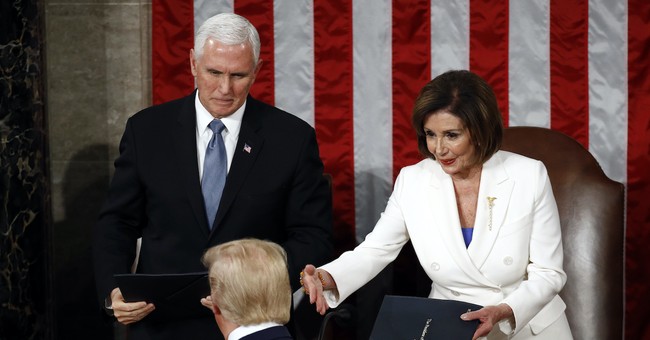 President Trump appeared to give Speaker of the House Nancy Pelosi (D-CA) a cold shoulder at the start of his 2020 State of the Union speech on Tuesday.

Trump walked up to the lectern in the House of Representatives and Trump turned to give Vice President Mike Pence and Pelosi each a folder. He did not shake Pence's hand, but when Pelosi received the folder, she reached out her hand, but Trump did not shake it as he turned back around.

It's unclear if the snub was intentional or if he just did not see her hand.

Trump wasted no time to state how his administration has made the country stronger through his policies over three years.

"I am thrilled to report to you tonight that our economy is the best it has ever been. Our military is completely rebuilt, with its power unmatched anywhere in the world, and it is not even close. Our borders are secure, our families are flourishing, our values are renewed, our pride is restored. And for all of these reasons, I say to the people of our great country and to the members of Congress, the state of our union is stronger than ever before," he said.

The Republican members of Congress chanted, "Four more years!" and some Democrats can be heard booing and groaning throughout Trump's speech.

Sinema is the only Democratic Senator to stand for tax cuts. #SOTU

Trump is addressing Congress while still under impeachment, which was passed by a majority of House Democrats voting in favor of the two articles of impeachment. Pelosi has stated that even if the Senate votes to acquit, he will be impeached forever.