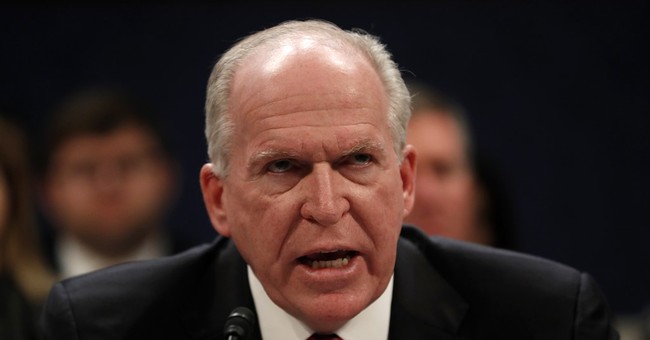 "The reason why Mr. Trump has this very contentious relationship with CIA and FBI and the deep state people is because they tell the truth," Brennan said at an event hosted at George Mason University on Wednesday.

"Because they cannot be manipulated like clay in his hands. Because they will stand up and speak out when things are wrong. And they will tell him what the truth is. And the truth he fears because he has lived on anything but the truth, not just during his presidency, but even before that," Brennan continued.

"So thank goodness for the women and men who are at the intelligence community and law enforcement communities, who are standing up and carrying out their responsibilities on behalf of their fellow citizens. So if he doesn’t use their intelligence, if he doesn’t use their contributions to this country’s security, well, bad on him. But our people who continue to fight the fight in the trenches here as well as overseas will do their work irrespective of what he is going to do or say about them," he said.

Former Acting CIA Director John McLaughlin, who was also at the event, echoed Brennan's thoughts on the role the intelligence community has played in the impeachment inquiry, saying, "Thank God for the deep state."

McLaughlin said despite the intelligence community's flaws, it "is institutionally committed to objectivity and to telling the truth. It is one of the few institutions in Washington that is not in a chain of command that makes or implements policy. Its whole job is to speak the truth. It’s engraved in marble in the lobby."