WATCH: Air Travelers Stop What They're Doing to Sing the National Anthem to Gold Star Families 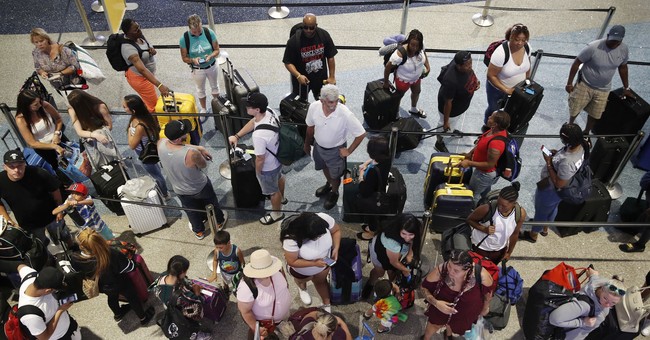 As Gold Star Families were making their way through Nashville International Airport to participate in the Gary Sinise Foundation’s annual Snowball Express program, fellow air travelers decided to show their support by singing the national anthem.

“At the Nashville airport I walked out into the concourse to this scene @americanairlines was flying a plane full of children who had lost a parent in combat to Disneyworld on an all expenses paid trip and they threw a party for them at the gate,”Jen Tringale wrote on Facebook. “But when they announced them over the [loudspeaker] and they lined up to board the plane the whole airport literally stopped and sang the national anthem with military present in salute.”

“Most every person standing around, myself included was bawling at the sight of these kids and spouses who have paid so great a price for our country. To see all of this at Christmas time was so humbling. Seeing the general public in an airport stand still to honor these kids was simply beautiful,” she added.

The show of respect was for the families as they were on their way to take part in the five-day trip to Disney World, provided to them by the Gary Sinise Foundation.

Gary Sinise Foundation’s Snowball Express 2018 at Walt Disney World in Orlando this year! A chance to heal, connect with other Gold Star families, and celebrate! 1,722 family members of our fallen heroes at the happiest place on earth. pic.twitter.com/zdE4gcEwiM

“While Snowball Express has been around since 2006, this is its first year as an official program of the Foundation and our first year at Disney World,” Gary Sinise said in a press release. “We are so grateful that American Airlines continues their tradition of traveling our Gold Star families from all around the country for this amazing healing event. We can’t wait to see our 1,722 Snowball family members!”