President Bush’s Service Dog Will Have a New Mission: Serving Other Veterans 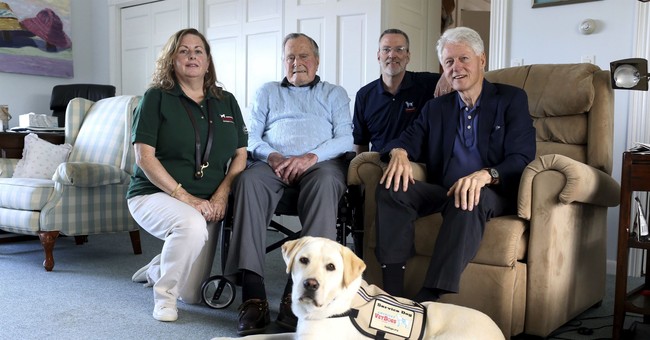 With the passing of former President George H.W. Bush, Sully, his service dog, has captured America’s hearts as he was photographed sleeping next to his master’s American flag draped coffin. As he has accomplished his mission with the Bush family, his service to veterans is not over.

America's VetDogs, the organization who provided Sully, revealed he will be helping veterans at Walter Reed National Military Medical Center.

“Many of you have been asking about what Sully will do next, and we appreciate all of the love you have for him,” the organization wrote on Facebook. “Sully will be joining the Walter Reed National Military Medical Center's Facility Dog Program.”

“He will be working alongside fellow VetDogs facility dogs SGT Dillon and SGT Truman who are there to assist with physical and occupational therapy to wounded soldiers and active duty personnel during their journey to recovery at Walter Reed Bethesda,” they continued.

A great joy to welcome home the newest member of our family, "Sully," a beautiful -- and beautifully trained -- lab from @AmericasVetDogs. Could not be more grateful, especially for their commitment to our veterans. pic.twitter.com/Fx4ZCZAJT8

Sully has been with the president’s family and is accompanying them as they travel to Washington, D.C.:

Sully with #Bush41 and family at Houston funeral home this morning pic.twitter.com/urQW7k9ORH

And there is HW’s loyal “Sully” boarding Air Force One with the Bush family escorting the former President from Texas to the nation’s capitol. This is just beautiful. The love of a dog. pic.twitter.com/yGHdhn2O5F

Bush will lie in state in Washington, D.C. at the U.S. Capitol Building until early Wednesday morning with his funeral taking place at 11 a.m. at the Washington National Cathedral. President Donald Trump has declared Wednesday as a national day of mourning.