'This Is Just More Grandstanding': Sarah Sanders Rips Into CNN Lawsuit Against the White House 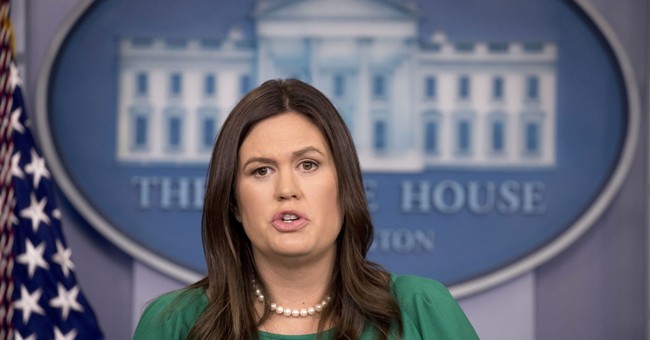 The White House is firing back at CNN after the cable network announced they will be filing a lawsuit against them after revoking CNN White House reporter Jim Acosta’s press credentials.

“We have been advised that CNN has filed a complaint challenging the suspension of Jim Acosta’s hard pass. This is just more grandstanding from CNN, and we will vigorously defend against this lawsuit,” White House press secretary Sarah Sanders said in a statement.

“CNN, who has nearly 50 additional pass holders, and Mr. Acosta is no more or less special than any other media outlet or reporter with respect to the First Amendment,” Sanders continued. “After Mr. Acosta asked the President two questions—each of which the President answered—he physically refused to surrender a White House microphone to an intern, so that other reporters might ask their questions. This was not the first time this reporter has inappropriately refused to yield to other reporters.”

“The White House cannot run an orderly and fair press conference when a reporter acts this way, which is neither appropriate nor professional. The First Amendment is not served when a single reporter, of the more than 150 present, attempts to monopolize the floor. If no check on this type of behavior it impedes the ability of the President, the White House staff, and members of the media to conduct business,” Sanders concluded.

In their lawsuit, CNN said the credentials were being revoked due to “years of hostility” by Trump:

Defendants revoked Acosta’s White House credentials because, in the President’s own words, Acosta failed to “treat the White House with respect” at a White House press briefing. This severe and unprecedented punishment is the culmination of years of hostility by President Trump against CNN and Acosta based on the contents of their reporting—an unabashed attempt to censor the press and exclude reporters from the White House who challenge and dispute the President’s point of view.

“The hard pass is essential in large part because it allows immediate access to White
House grounds and its press offices,” CNN’s complaint argues. “ A hard pass thus lets a reporter react to fast-developing, important news stories. Without a hard pass, a reporter may well miss the newsworthy events, particularly including the many notable events that occur with little notice. A hard pass is effectively required to be a White House correspondent for a national news organization such as CNN.”