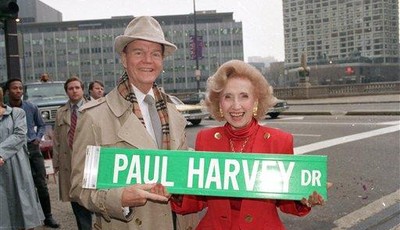 In a recent interview with conservative talk show host and Townhall.com blogger Hugh Hewitt, author Paul Batura noted that in researching his new book about Paul Harvey, he learned about the affection that millions of Americans had for the radio personality. In that interview, Batura stated that "People who were radio fans would stop what they were doing and adjust their day. They'd make sure they were in their car or at their lunch table listening to Harvey." Such an idea captures what Harvey meant to so many people--a feeling much discussed in Batura's new book on Harvey entitled "Good Day: The Paul Harvey Story."

I recently finished reading the book and was struck by the amazing story of the legendary radio personality. The biography of Harvey begins right before his birth and captures many of the main events of his youth including the riots in Tulsa that took place when Harvey was very young and the tragic death of Harvey's father. Later on, the book focuses on Harvey's budding career in radio and his early success. Batura notes the appeal of Harvey to the local Chicago market when he ultimately moved there: "Chicago listeners saw in Paul Harvey the emergence of a new Uncle Sam. He was honest, forthright, optimistic, and a patriot who appealed to their better natures." In addition to the great work that Harvey did over the airwaves for several decades, the book also explores Harvey's philosophy on promoting products (he "had a longstanding policy that he would not endorse any product he didn't personally use and enjoy with enthusiasm") to his love for his beloved wife Lynne.

Harvey passed away earlier this year but before he did, he received the Presidential Medal of Freedom from President Bush. As Batura writes, "Only in America could a fatherless boy of a widowed mother with little means, zero influence, and only a high school diploma grow up to stand beside the President of the United States and be declared the epitome of excellence in his field of professional endeavor."

Batura's book does an excellent job in capturing the times in which Harvey lived and in describing what made Harvey a legend in broadcasting who many people will always remember as the man interested in telling "the rest of the story."