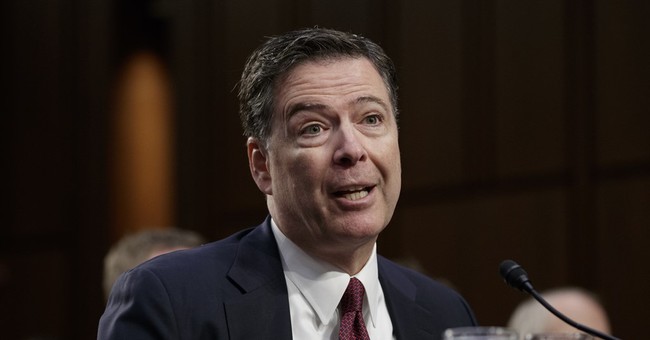 Former FBI Director James Comey's been meeting with publishers and editors in New York City about his upcoming memoir and could be looking at a substantial advance, the New York Times reports.

At the time he was fired, Keith Urbahn, founder of Javelin (the literary agency now representing Comey) told the Daily Caller:

"[I]t depends on the timing and how well crafted the book proposal is, but conceivably Jim Comey could get to an eight-figure advance for his memoir. Getting to that level hinges on the story he has to tell."

Since Comey had a front-row seat to the biggest political scandals of the last few years, it's clear Comey has quite a few stories to tell. The emphasis of his book, though, is slightly ironic. Matt Latimer, Urbahn's partner at Javelin, spoke with the NY Times about the topic.

The book will not be a conventional tell-all memoir, but an exploration of the principles that have guided Mr. Comey through some of the most challenging moments of his legal career. Among those are his investigation into Hillary Clinton’s private email server during a contentious election, and his recent entanglement with the president over the F.B.I.’s inquiry into Russia’s interference in the 2016 election.

"It's a book about leadership and his search for truth, informed by lessons and experiences he’s had throughout his career, including his recent experiences in the Trump administration," said Mr. Latimer...."It will speak to a broader desire in our country for more ethical leadership.”

It will be interesting to see how he frames the lessons and experiences throughout his career. Comey's recent testimony about his interactions with former Attorney General Loretta Lynch, the Clinton investigation, Donald Trump, and his principles have seemed to guide him to do whatever is the most personally advantageous at the moment.