North Korea Fires Another Ballistic Missile; This One Lands in Sea of Japan 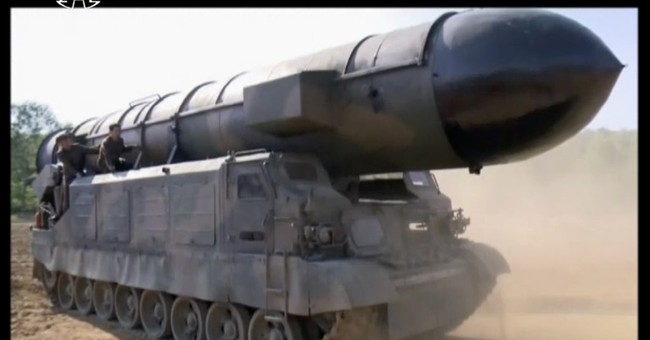 North Korea fired a short-range ballistic missile Sunday which landed in the Sea of Japan, US Pacific Command said. South Korea's Joint Chiefs of Staff believe it was a Scud-type missile.

The missile was launched from Wonsan at 10:40 p.m. Hawaii Time and tracked for six minutes, according to a statement released by the Command.

Japanese fishing and cargo vessels are active in the area in which the missile landed, waters which Japan considers part of its exclusive economic zone. Yoshihide Suga, Prime Minister Shinzo Abe’s chief cabinet secretary, commented, “Japan absolutely cannot tolerate North Korea’s repeated provocative actions." He added that there were no immediate reports of damage to ships or airplanes.

North Korea is attempting to develop a nuclear-tipped ICBM that could reach the United States mainland. On Friday the Pentagon announced it will test a missile defense system Tuesday at Vandenberg Air Force Base in California. The interceptor is the "most technically advanced" system the U.S. has, but critics say it's the "least reliable."

The director of the Defense Intelligence Agency, Marine Lt. Gen. Vincent Stewart, said this week that Kim will eventually succeed if "left unchecked," while Secretary of Defense James Mattis said on "Face the Nation" Sunday that "[a] conflict in North Korea, John, would be probably the worst kind of fighting in most people's lifetimes,"

Kim Jong Un shows no signs of backing away from his nuclear ambitions, and UN sanctions don't seem to be doing anything. Let's hope Mattis has a way to deal with North Korea that avoids another conflict on the Korean peninsula.