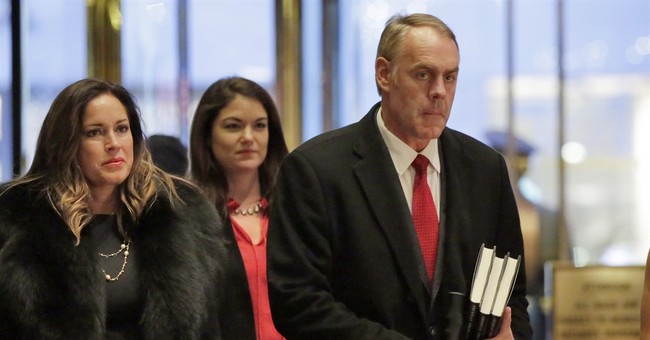 Two days after Trump insiders said the Montana Republican was offered the job, Rep. Ryan Zinke was officially nominated by president-elect Trump to be the next Interior secretary.

"I am pleased to nominate Congressman Ryan Zinke as our Secretary of the Interior. He has built one of the strongest track records on championing regulatory relief, forest management, responsible energy development and public land issues," Trump said in a prepared statement. “As a former Navy SEAL, he has incredible leadership skills and an attitude of doing whatever it takes to win.”

Zinke will lead the Interior Department’s 70,000 employees and be in charge of most of the United States’ federal land – including offshore drilling, wildlife, parks, and Indian tribal relations.

As Montana’s at-large representative, Zinke has a history of representing large swaths of land. Amid the announcement, Zinke has already been receiving heaps of praise by his colleagues. Speaker Ryan came out with a statement detailing Zinke’s time serving his country as a Navy Seal and the work he’s put in on the House’s Natural Resources Committee.

.@RepRyanZinke is a no-nonsense leader who has spent his entire life serving this country.