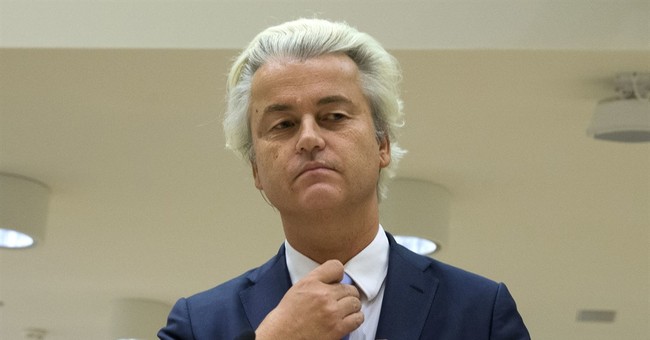 Geert Wilders, the leader of Dutch political party The Party for Freedom, has been found guilty of hate speech by a three-judge panel. The ruling comes after the anti-Islamic lawmaker has been under fire for comments made at a political rally in 2014.

Following local elections in 2014, Wilders asked a crowd of supporters if they wanted “more” or “fewer” Moroccan immigrants to the Netherlands. The crowd responded by chanting “fewer!” Dutch officials received almost 6,000 complaints about the incident.

Some background information: The Netherlands has not been spared from the populist wave sweeping Europe and the United States. Much like their EU counterparts (Germany and France), the Dutch population has been inundated with Muslim immigration – mostly from Morocco.

Geert Wilders has been involved in Dutch politics for awhile now, but his Freedom Party has seen a meteoric rise in popular support as of late. Wilders has been advocating for less Muslim immigration for years – citing their resistance to assimilate to the Dutch way of life and their intolerance for Western ideals. His party’s platform advocates for the closing of all mosques in the Netherlands and banning Korans in public buildings.

In their ruling, the judges stated Wilders’ language in the 2014 speech was “demeaning and insulting towards the Moroccan population.” However, they concluded no further punishment was necessary and that the conviction alone would suffice.

This hasn’t stopped Wilders from protesting the ruling – or the court procedure in its entirety. He issued a statement Friday after the conviction saying it was a blow to free speech and a hit-job by “haters” of the Freedom Party.

“The Netherlands have become a sick country,” he stated. “I am not a racist and neither are my voters. This sentence proves that you judges are completely out of touch. Support for the Party for Freedom is stronger than ever and keeps growing every day. The Dutch want their country back.

“Today I was convicted in a political trial which, shortly before the elections, attempts to neutralize the leader of the largest and most popular opposition party. But they will not succeed, not even with this verdict, because I speak on behalf of millions of Dutch.”

Dutch voters go to the polls in three months. Has the trial hurt his or his party’s standing with the public?

Since the election of Donald Trump, Wilders has shot ahead of his nearest campaign rival, Mark Rutte - the current prime minister and leader of the Liberals. Rutte is now losing to Wilders according to recent polling.

Many experts believe the court ruling against Wilders will only further energize his supporters.