What Will the Republican Agenda Be? 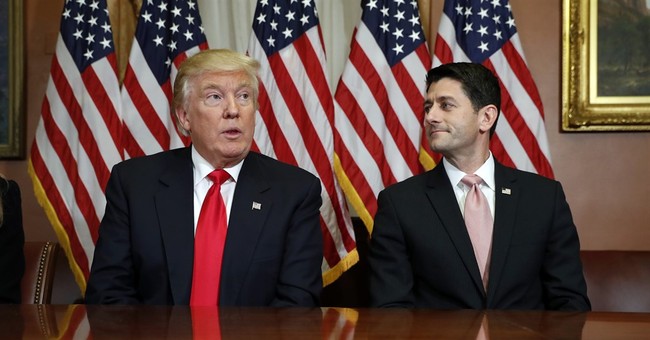 Above is a clip of Speaker Ryan and Trump speaking to reporters during the president-elect's highly anticipated trip to D.C. Pence and Melania look on as the two Republican leaders discuss their upcoming agenda for the next congressional session.

The GOP will control the White House, Senate, and House of Representatives in 2017. The country is looking at Trump, McConnell, and Ryan as they see what will be Capitol Hill’s legislative priorities for the next two years.

A deep policy wonk, Ryan has touted his Better Way agenda to voters as he crisscrossed the country campaigning for Republican House candidates. Ryan undoubtedly spoke with Trump on enacting key measures in Better Way. Despite having a rocky relationship at the start, The Speaker and Trump seem to have buddied-up.

Ryan spoke to Fox News on “the past being the past” and how the two are now working together to enact conservative reforms for the country.

The national GOP thought Trump would be a drag on down-ballot Republicans. Instead, Trump’s coattails pulled Republicans to victory across many states and congressional districts – and they couldn’t be happier. This is certainly a boost to Trump as he works with these same Republicans on his White House agenda.

A lot of speculation is taking place on what exactly Trump’s priorities will be. Obamacare should be expecting serious changes – if not an outright repeal of the law. After his meeting with President Obama, Trump told the Wall Street Journal he was open to keeping some provisions of the law - such as forbidding discrimination against individuals with pre-existing conditions and allowing young adults to stay on their parents' healthcare until the age of 26.

Border security was a theme of Trump’s campaign and something Speaker Ryan said will be looked at. A wall spanning the entire border with Mexico may not come to fruition, but major changes are to be expected.

A host of unneeded regulations enacted by Obama is on the chopping block. Many of these regulations pertain to Obama's environmental agenda.

Also, Trump will begin his first day in office with a Supreme Court vacancy to fill. He released a list of potential Supreme Court picks earlier during the campaign that conservatives loved.

Regarding the Supreme Court - will Senate Majority Leader Mitch McConnell keep filibuster rules for SCOTUS nominees in place? Right now, the Senate requires a 60-vote threshold for allowing nominees to make it to the Court. Harry Reid was the first one to begin the disintegration of the filibuster rule. Now Republicans are calling on McConnell to do the same for SCOTUS nominees. However, the Majority Leader of the Senate is regarded as a strict traditionalist. He is not apt to change the rule so quickly.