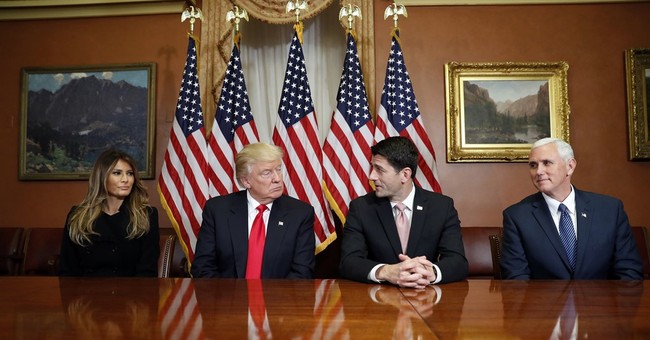 Not long before Election Day, Speaker Ryan could not even mutter Trump’s name during public interviews, referring to him simply as “the Republican nominee.”

Things have certainly changed in the past few days.

Following a Capitol Hill lunch meeting on Thursday, Ryan and president-elect Trump (Mike Pence and Melania also sitting alongside) spoke to reporters on the pending Republican agenda being set for the next congress. Ryan even used a phrase made famous by Trump: Make America Great Again.

“We’re gonna turn that victory into progress for the American people,” he said. “And we are now talking about how we’re going to hit the ground running to make sure that we can get this country turned around and make America great again.”

The blossoming relationship between Trump and Ryan shows hope that the two will work closer together on conservative solutions. The two Republican leaders (along with Mitch McConnell) will control both chambers of Congress and the White House next year.

It appears the Republican leaders on Capitol Hill who opposed Trump are finally boarding the Trump Train.