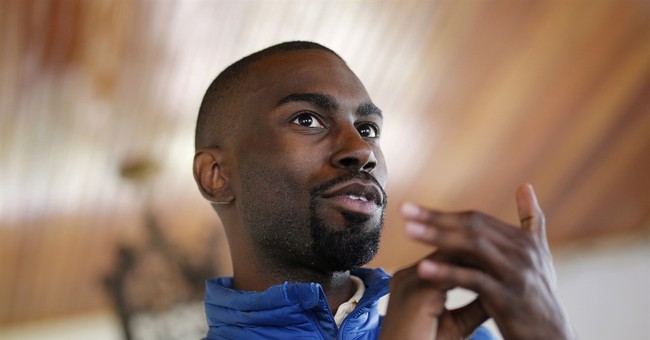 DeRay Mckesson, an activist and leader in the Black Lives Matter movement, wrote an op-ed Wednesday morning announcing his support for Hillary Clinton. In the piece, Mckesson explains the differences he has with the Democratic nominee, but concludes that she is the best option available.

I am voting for Hillary Clinton.

Make no mistake, I do not agree with Clinton on everything. For that matter, there are few people in the world with whom I agree on everything.

Her platform should call for an end to the death penalty. It should end the federal government’s “Equitable Sharing Program,” which helps police take cash and property from people who are never convicted of wrongdoing. And when I met with her last week, I asked her to address not only how the federal government should treat nonviolent drug offenders but also the many others whose lives have been impacted by the system of mass incarceration.

But I agree with Clinton more than I disagree with her.

Also, Mckesson had some extremely harsh predictions under a possible Trump presidency.

Talking about the exploitation of labor, Mckesson has gained notoriety for defending the rioting and looting of retail shops. After obtaining a lecturing position with Yale, the BLM activist went off syllabus to make the case to students that looting stores is justified and claimed such acts are comparable to the Boston Tea Party.

Here’s Mckesson arguing with Wolf Blitzer over his puzzling philosophy.

Will Clinton accept the endorsement from man who openly supports violence against peaceful store owners?