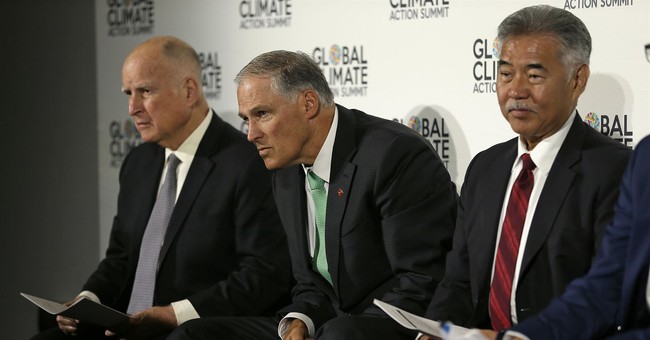 Governor of Washington state and 2020 Democratic candidate Jay Inslee compared the effects of climate change to a terrorist threat.

“Imagine what the national response would have been if that had been caused by a direct terrorist threat?” Inslee said at the University of Washington on Wednesday. “Well, we have today a threat that is causing terrible results of this nature across the United States.”

Inslee didn’t make an appearance at the university to advertise his campaign, but he did touch on the highlight of his presidential ballot. He referenced a report from the Director of National Intelligence, who wrote in 2016 that the effects of climate change would cause political destabilization around the world.

Inslee indirectly blamed President Donald Trump for preventing the government from taking actions to save the planet.

“Our entire national-security personnel have reached a consensus on this, but we have a person in the White House who’s calling this a Chinese hoax,” Inslee said. “Any civilian leader who takes this position, if they were a sentry in a United States military post and they refused to recognize the current present threat, they would be court-martialed.”

The day before, Inslee visited the Iowa State Memorial Union to answer questions about his top issues in his campaign, including climate change. During the questioning period, he said that his Democratic opponents also don’t take climate change as seriously as he does.

“I think perhaps they have not had as much experience as I have had,” Inslee said.