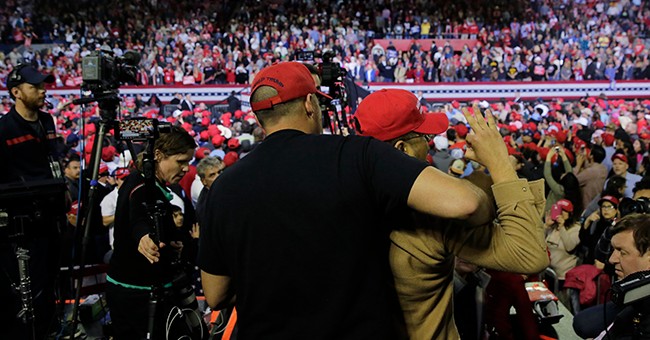 El Paso County Sheriff's Department said that they wouldn’t press charges on the man who assaulted a BBC cameraman during the Trump rally at El Paso, Texas.

According to the Washington Examiner, the department told them that they don’t have the name of the attacker either.

"[T]he reporter did not file a report with the Sheriff’s Office so we do not have any information on him," the department spokeswoman Christina Acosta wrote to Washington Examiner.

On Monday, BBC cameraman Ron Skeans was filming President Donald Trump at his rally when a man in a “Make America Great Again” hat pushed him and his camera over.

“F*** the media,” the attacker shouted as he was carried out by event staff. Some people at the event shouted "let him go," when it happened.

Our cameraman Ron Skeans is one of the most decent people in the business - a proud son of Ohio and a big fan of his cabin in West Viriginia. This should not have been allowed to happen. https://t.co/S0dXFH2kqr

While no one sent the Sheriff’s office a report, BBC said that they had “written to White House Press Secretary Sarah Sanders asking for a review of security arrangements for the media attending the president's rallies following the attack.”

Washington Examiner said that BBC News America Bureau Editor Paul Danahar wrote to the White House as well as the Trump campaign about the incident. However he refused to provide further details.

You can watch the video of the attack below: