What to Make of the Just-Unveiled Bipartisan Agreement on Guns 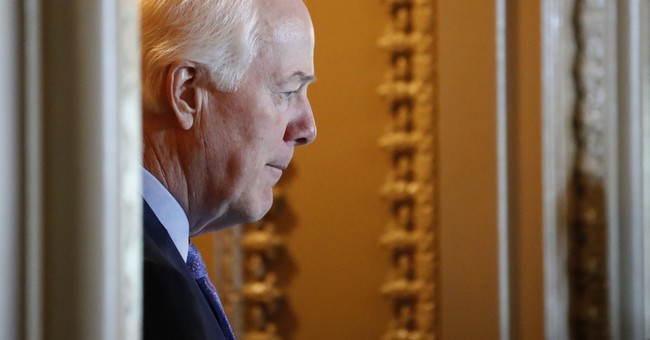 Before we get to the details of the new bargain struck by 20 Senators -- ten on each side of the aisle -- let's start with two observations about the horrific Uvalde massacre last month.  First, as is always the case with mass shootings, it will never be possible to legislate away the problem of evil.  And for those who demand major gun restrictions, they will always have to contend with the Second Amendment.  They can either repeal or amend it, or they can work to install a Supreme Court majority that will do so for them.  But it says what it says, and it means what it means.  Second, in Uvalde specifically, we are still learning about the absolutely shocking and outrageous failures of leadership and action from law enforcement officials on the ground.  One in particular:

Uvalde school district police chief Pete Arredondo, one of the first responders to last month's elementary school massacre, said he intentionally left his two radios behind when he ran into the building to try and stop the gunman, making it difficult for him to be in contact with most of the other officers on the scene throughout the entire situation. In a phone interview with the Texas Tribune, Arredondo said he left two radios outside the school because he believed they would have slowed him down and that every second mattered. One radio had a clip that may have fallen off his tactical belt, while another had an antenna that would have hit him as he ran, he told the Tribune. However, the radios would have connected him to the campus and police networks, according to the outlet. Arredondo said he also wanted both hands free to hold his gun so he could fire it more accurately.

Surreal.  This guy's story is that he deliberately chose to not bring radios with him to an active shooter situation at an elementary school. It seems as though he's landed on this story to help explain away the stunning reality that children were calling 911 asking for help while trapped in a classroom with the shooter, as police waited on the other side of the door for the better part of an hour. That massive delay is inexcusable, but Arredondo appears to be arguing that he didn't know that there were people needing to be saved because he lacked communications equipment. This excuse looks like it's false, which we'll address in a moment, but let's take it at face value for a moment. Choosing to leave his radio behind is obviously a disastrously terrible decision, and not just in retrospect. Beyond that, his "reasons" for doing so look even worse because his 'not a moment to waste' explanation doesn't align with his actions once he was on-scene. The scandal here is how long they waited. Time was of the essence. Then they wasted it, minute after excruciating minute. And where to begin on the 'both hands on the gun' line? Let's just say that the point was ultimately moot because he never ended up firing a shot. Other officers, not under his jurisdiction, ended up finally taking lethally-belated action (the chief also claims he didn't realize he was in charge, despite his job title. How on earth can this person remain in this position, or retain the political seat he just won?)  And yes, it looks like the delay was in fact lethal:

Heavily armed officers delayed confronting a gunman in Uvalde, Texas, for more than an hour even though supervisors at the scene had been told that some trapped with him in two elementary school classrooms needed medical treatment, a new review of video footage and other investigative material shows. Instead, the documents show, they waited for protective equipment to lower the risk to law enforcement officers. The school district police chief, who was leading the response to the May 24 shooting, appeared to be agonizing over the length of time it was taking to secure the shields that would help protect officers when they entered and to find a key for the classroom doors, according to law enforcement documents and video gathered as part of the investigation reviewed by The New York Times. The chief, Pete Arredondo, and others at the scene became aware that not everyone inside the classrooms was already dead, the documents showed, including a report from a school district police officer whose wife, a teacher, had spoken to him by phone from one of the classrooms to say she had been shot.

More than a dozen of the 33 children and three teachers originally in the two classrooms remained alive during the 1 hour and 17 minutes from the time the shooting began inside the classrooms to when four officers made entry, law enforcement investigators have concluded. By that time, 60 officers had assembled on scene. “People are going to ask why we’re taking so long,” a man who investigators believe to be Chief Arredondo could be heard saying, according to a transcript of officers’ body camera footage. “We’re trying to preserve the rest of the life.” Investigators have been working to determine whether any of those who died could have been saved if they had received medical attention sooner, according to an official with knowledge of the effort. But there is no question that some of the victims were still alive and in desperate need of medical attention. One teacher died in an ambulance. Three children died at nearby hospitals, according to the documents. Xavier Lopez, 10, was one of the children who died after being rushed to a hospital. His family said he had been shot in the back and lost a lot of blood as he awaited medical attention. “He could have been saved,” his grandfather Leonard Sandoval said. “The police did not go in for more than an hour. He bled out.”

So despite his excuses relayed above, the New York Times reports this chief and others did know that there were survivors inside the classroom.  An absolute scandal.  And while it's impossible to know with total certainty if some of the murdered victims would have survived if they'd received attention sooner, it seems highly probable that would have been the case.  Children were bleeding out as these officers stood around waiting, as precious minutes ticked by.  Outside, officers were detaining parents demanding immediate intervention. It's enraging.  No law can prevent such incompetence and sheer dereliction.  That's a reality.  Which brings us to the Senate outline announced yesterday:

NEW — Gun deal is out. pic.twitter.com/wufZ9RcdFb

The plan, endorsed by 10 Republicans and 10 Democrats, would include funding for mental health resources, boosting school safety and grants for states to implement so-called red flag laws that allow authorities to confiscate guns from people deemed to be dangerous. It would also expand the nation’s background check system to include juvenile records for any prospective gun buyer under the age of 21. Most notably, it includes a provision to address what is known as the “boyfriend loophole,” which would prohibit dating partners — not just spouses — from owning guns if they had been convicted of domestic violence. The framework says that convicted domestic violence abusers and individuals subject to domestic violence restraining orders would be included in criminal background checks...The outline, which has yet to be finalized, falls far short of the sprawling reforms that President Biden, gun control activists and a majority of congressional Democrats have long championed, excluding a ban on assault weapons. And it is nowhere near as sweeping as a package of gun measures passed nearly along party lines in the House last week.

I'll reserve judgment until we see legislative language, which will be a crucial element, but this seems promising. Progressives will decry it as woefully insufficient, but it's realistic and serious. It looks like it takes several sensible steps in the right direction, and addresses a number of the points I've made on this subject in recent days -- without infringing on Second Amendment rights.  And if the ten Republicans who've signed onto the agreement stand behind the finalized legislation, that would constitute a filibuster-proof majority.  And more GOP members may sign on beyond the initial signatories:

President Biden has blessed the plan, and Senate Majority Leader Chuck Schumer says he intends to bring the deal up for a floor vote once the bill is actually written.  And again, those details will be very important.  I'll leave you with this upbeat note on compromise:

All told, a big victory for compromise — and a feather in the cap of Connecticut Sen. Chris Murphy, who curtailed his gun control goals to cut a good deal. Texas Sen. John Cornyn also played a pivotal role for Rs, repping the state of the Uvalde school massacre.

And as I said, unless something shifts dramatically, it looks like ten supportive Senate Republicans is the floor.