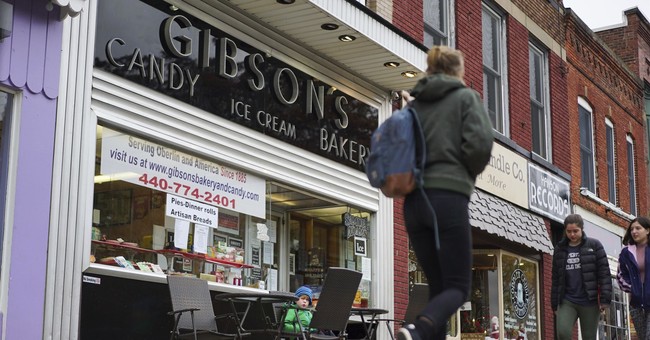 On this Friday, I present to you – not as an April Fools joke – a heartening development in a "Woke Tales" saga out of Ohio. The story began in 2016 with an incident at a small, family-owned bakery that had been a pillar of the local community for decades. Some Oberlin College students tried to shoplift some wine, prompting a confrontation. Due to the skin color of the individuals involved, the situation devolved into an unhinged morality play, detached from any facts. The school sided with the mob. A lawsuit was filed in 2017. Details, via a CBS News report from 2019:

David Gibson, one of the owners of Gibson's Bakery in Oberlin, described what happened when his son, Allyn, was at the cash register when the student tried to buy a bottle of wine: "My son confronted him and would not accept the false ID...But realized that he was also trying to steal two bottles of wine. And at that point he denied him the sale....He attempted to take a picture of him with his phone. At that point, the young man took his phone and shoved it in his face and was able to run out of the store. "My son and I both pursued [him].  My son's quite a bit faster than I am at this age.  And outside of the store [he] tried to detain him by hugging him.  And he fell to the ground.  And I witnessed all of this.  And then we had multiple people come in and start hitting my son." ...

David Gibson knew that trouble was brewing. When the officer at the scene told him, "We're not going off what they're saying; we're charging him with robbery," Gibson remarked, "They're going to be trashing us." It wasn't long coming. The next morning, in fact, a crowd appeared chanting, "No justice, no peace!  No justice, no peace!" Oberlin is one of the most liberal college campuses in the country, and remember, Donald Trump has just been elected president the previous day.  Totally unrelated to what had happened at Gibson's bakery, but it does help explain the mood. One demonstrator said, "We are here today because yesterday three students from the Africana community were assaulted and arrested as a result of a history of racial profiling and racial discrimination by Gibson's Bakery, located 23 West College Street." Which is where generations of Gibsons had been running the bakery for more than a hundred years.

"At court, roughly nine months later, the young man, a student at Oberlin College in Ohio, received a reduced sentence after pleading guilty to attempted theft, essentially confirming the police report of what had happened," the story explains. That detail isn't so minor, but the whipped-up, frenzied mob wasn't really interested in facts or culpability. They were interested in self-righteous preening and Larger Truths. The famously left-wing college got involved, joining the smear campaign:

The college officials and students accused the bakery of racial profiling, called a boycott, suspended Gibson’s business with the college, and organized protests outside the bakery. At the protests, a flyer was handed out, according to witnesses who testified at trial, by Dean of Students Meredith Raimondo, who also handed out stacks of flyers for others to distribute. The flyers accused the Gibsons of a long history of racial profiling, including in the incident with these shoplifters. The Gibsons disputed that allegation and that they did anything wrong in this incident, and requested a public apology from the college in order to repair the reputational damage, but the college refused.

"Our feeling is that, that's what you have in life is your reputation. It had taken generations to build this reputation for us. And in just one day, we lost it." That damage to their reputation has led to what the Gibsons claim is a 50% loss of business. When the college refused to issue a statement exonerating the family of racism, the Gibsons filed a lawsuit...Last June, a local jury found Oberlin College on the hook for $44 million in damages. The court has since reduced the award to $31.5 million, and Oberlin College has appealed that judgment.

Here's David Gibson getting choked up with emotion following the favorable jury verdict at the time:

As the excerpt above points out, Oberlin appealed the jury's judgment, and over the course of the continued litigation, Mr. Gibson passed away from cancer. But the case marched on, and the appeals court has now upheld the entire verdict. A huge blow to Oberlin, as National Review reports:

An Ohio appeals court has upheld a ruling that awarded more than $30 million to a bakery that accused Oberlin College of damaging its business and libeling them with false accusations of racism. A three-judge panel on the Ninth District Court of Appeals issued a unanimous decision to uphold a 2019 ruling by Lorain County Judge John Miraldi, who initially awarded the bakery more than $40 million in punitive and compensatory damages, Cleveland.com reported. However, the sum was later reduced to $25 million, though the bakery was awarded more than $6 million for lawyers’ fees...Gibson’s Bakery sued the college in 2017, accusing the school and one of its administrators of hurting its business and libeling them over an incident in which the son of the bakery owner stopped three black Oberlin College students, one of whom was stealing wine bottles from the store, in November 2016. Students from the school protested the bakery after the arrest, handing out fliers outside the bakery telling shoppers to buy their baked goods elsewhere. Oberlin College regularly purchased baked goods from the bakery for its student dining service but suspended its purchasing for a month after the incident. The students pleaded guilty to a misdemeanor in 2017 and said the younger Gibson’s actions were not racially motivated.

This is justice. A leftist university coddled lunacy from its students, who were all spun up over the election of Donald Trump. They joined in the unjust libeling and punishment of innocent people, based on bogus racism charges, to appease their raging mob. They became part of the raging mob. The true victims in the case faced no choice but to present the facts to a jury of ordinary people, who recognized the injustice and slapped huge damages on a deep-pocketed institution responsible for fanning the flames. That decision has now been unanimously upheld. As I've said before, I'm not a litigious person by nature, but in some of these cases, the only way to force institutions to think twice before casting in their lot with the woke screamers is to present a plausible fear of huge economic consequences for doing so. Juries can be an equalizer. Students had every right to protest, but when Oberlin abetted defamation with words and deeds, the calculus shifted. The initial verdict and fresh decision from the appeals panel represent an isolated but satisfying victory in the struggle against the destructive excesses of these people. I'll leave you with this. On and on it goes:

When a white person showed up, he was banned & a county official tried to cover it up. /1https://t.co/w1ACA9rhl9