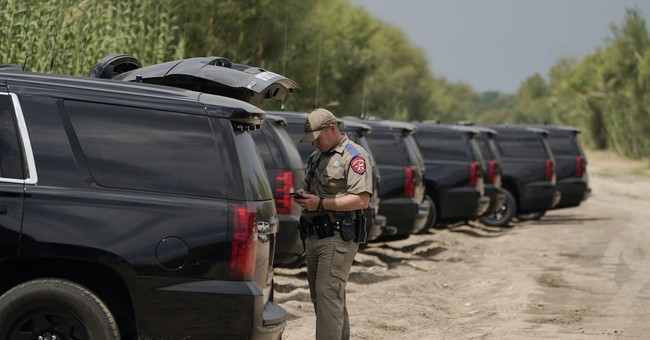 The Biden border crisis is not just about overwhelmed US resources and personnel, large-scale violations of American sovereignty, and failed policies.  There is a significant national security and public safety component at play, as well.  To stipulate, just as illegal immigrants are not driving COVID infections inside the US (which does not excuse the crazy, COVID-lax policies in place at the border), illegal immigrants are also not primary fuelers of crime in the United States.  One doesn't need to wade into xenophobic tropes, however, to recognize that there are, in fact, very bad people who want to enter our country unlawfully -- and systemic weakness on enforcement, with resources stretched to the breaking point, makes it easier for dangerous individuals and elements to take advantage.  To deny that is a rejection of reality.

We've noted previously that part of the problem with the crush of illegal immigrants and 'asylum-seekers' (bona fide and otherwise) who consume an enormous amount of energy and man power just to apprehend and process is that these logistical activities divert enforcement efforts elsewhere.  According to US officials, this is by design, with cartels "dictating" border traffic in such a way as to consume Border Patrol's time and attention.  Here is President Biden's own CBP chief, Raul Ortiz, explaining the scheme over the summer.  This was before border encounters grew even worse despite the scorching temperatures:

"You've got to manage these groups [of illegal immigrants arriving in the US].  And why are they doing this? Because the cartels are dictating, right? They're telling these groups, 'I want you to cross here'...and then when that happens 'we're going to slide our narcotics through over here, or maybe aliens who are criminal aliens, we're going to try to get them through over here.'  What we can't do is lose sight of the fact that they're trying to do this."

Just a few weeks ago, a former acting CBP commissioner said that hundreds of miles of the border were now effectively 'unpatrolled' due to the recent crisis in Del Rio.  What are the consequences of Border Patrol agents being distracted, overworked, demoralized and even falsely demonized by the White House and president?  Cartels, traffickers, gangs, and even potential terrorists eagerly exploiting the situation.  Here's another former CBP leader laying out the threats in stark terms with Fox's Bret Baier:

Rodney Scott also mentioned that in addition to the more than 1.2 million border encounters under President Biden, there have been an astounding number of 'got aways' who evaded detection and successfully entered the US without any record or hinderance:

I’m told the way Border Patrol is able to calculate the number of gotaways is because agents can see the runners & evaders on cameras, but there just isn’t enough manpower to apprehend them. So they have to essentially watch them get away sometimes.

That number is approaching nearly half the population of President Biden's home state.  The administration insists the border is secure and there is no crisis.  These are some of the individuals just recently apprehended by US officials at the border.  Consider who is getting in undetected, especially with CBP focusing so many of its efforts and resources on the mass/family group arrivals (per deliberate cartel orchestration):

I'll leave you with this, which underscores the risk at to our personnel, plus a look at the endless flow of illegal migration that this administration has encouraged:

NEW: In multiple instances over the past several days, Texas DPS tells me suspected cartel gunmen involved in human smuggling have stood in & near the Rio Grande in Starr County and taunted TX National Guard soldiers. They wear tac vests & have AK47s.
Courtesy: @TxDPS @FoxNews pic.twitter.com/68dpIOa2Nc

Thread: We encountered dozens of illegal immigrants hiding in the brush last night in one small area. Extremely busy/active night in the La Joya/Penitas area in RGV. https://t.co/H98Rq1wBAc