Tax Hikes Incoming: Is Biden About to Shatter Yet Another Promise? 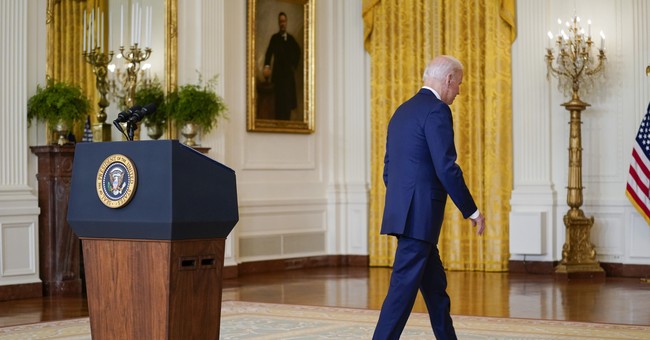 You know, I'm beginning to suspect that someone who broke his promise not to strand thousands of American citizens, legal residents, and allies in a terrorist-controlled country may not be scrupulously committed to upholding mere campaign pledges about tax policy. And if he's willing to claim that trillions of dollars in new spending costs "zero dollars," his connection to reality and fealty to truth are manifestly not, shall we say, rigid. Nevertheless, this is shaping up to be a prominent breach of a high-profile vow. As a candidate, Joe Biden insisted that his planned tax increases would exclusively hit "wealthy" Americans making $400,000 or more annually. He and his team have since reiterated that red line on multiple occasions since he was elected:

"I start with one rule: No one – I'll say it again – no one making under $400,000 will see their federal taxes go up. Period." Biden even pledged his word "as a Biden," which isn't worth much these days:

But, I’m going to make those at the top start to pay their share in taxes.

Again, the final product may end up looking different, and the situation is fluid. But unless all of those percentages (save a fraction of the last one) drop to zero percent, that promise has been broken. As it stands, it is projected to be blasted to pieces, hammering non-rich households all over the country. There's more, as Democrats cast about to identify additional "pay-for's," considering that they're nowhere near the $3.5 trillion mark, which would render their bill "paid for" (or costing zero dollars, as their new, insulting talking point claims):

House Democrats have proposed a tax hike on tobacco and nicotine products to help fund their $3.5 trillion spending plan.  The measure may increase current levies on cigarettes, cigars and roll-your-own and smokeless tobacco, according to a plan summary. They have also proposed new taxes on vaping products. Companies typically pass so-called excise taxes — levies on specific goods such as alcohol, gasoline, soda and tobacco — along to customers with higher prices. These tax increases may bring in more than $96 billion in revenue over the next decade, according to estimates from the nonpartisan Joint Committee on Taxation.  While health advocates applaud the plan, opponents say it violates President Joe Biden’s promise not to raise taxes on Americans making less than $400,000 per year.  “A tobacco tax is probably the most regressive tax out there,” said Ulrik Boesen, senior policy analyst of excise taxes at the Tax Foundation. “There’s no question that it’s a tax on people earning less than $400,000.”

Biden's "$400,000" vow ("period!") did not carve out Americans who smoke or vape. It also didn't carve out Americans who, er, drive cars or consume energy. Democrats are reportedly looking at a carbon tax as a funding mechanism for their reckless social spending, though they say they're also trying to figure out a way to exempt people earning lower amounts of money via a complex system of rebates. As you ponder the overall math, remember that $3.5 trillion is actually north of $5 trillion, based on a nonpartisan analysis that cuts through some glaring budget gimmicks. Also remember that the Democrats are not remotely close to "paying for" this package, even on paper, using every gimmick they can think of. As for the Biden proposal to raise taxes on businesses, the new rate would be higher than China's. Analysis from the nonpartisan Tax Foundation:

An increase in the federal corporate tax rate to 28 percent would raise the U.S. federal-state combined tax rate to 32.34 percent, higher than every country in the OECD, the G7, and all our major trade partners and competitors including China. This would harm U.S. economic competitiveness and diminish our role in the world.

Congressional Democrats have reduced that corporate tax rate hike to "just" 26.5 percent, which is still higher than China's, and above average in the developed world. Business tax hikes raise the cost of doing business.  Businesses, in turn, react accordingly, by reducing their costs to maintain their margins. This comes in various forms, including employing fewer people, cutting worker hours, and raising prices, passing along the burden to customers. This is how basic economic works, even if the White House brain trust thinks that's "unfair":

Jen Psaki: It’s “unfair and absurd” that companies would increase costs for consumers in response to us taxing them more. ?? pic.twitter.com/rHilrYdj4j

They can prattle on about "fairness" and "equity," but buzzwords don't change the laws of economics. I'll leave you with the latest reminder that the supposed "popularity" of this irresponsible binge is perhaps overhyped. Check out the numbers with independents:

More Americans say $3.5T is too much spending than say it’s either about right or too little. https://t.co/dngDPBg1ZX

These support numbers may seem high...until you consider that the question wording was about as favorable for the bill (listing all the things they want to spend money on) as possible and still didn't crack 50% anywhere. https://t.co/nTW93Y9QHA