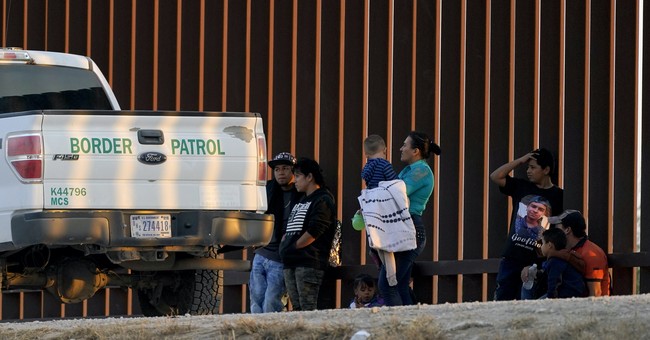 Say what you will about them, Democrats in Washington truly are committed to the "no crisis" bit, irrespective of undeniable realities on the ground. They've been denying the existence of a crisis at the Southern border for months now, chasing after "root causes" abroad, while ignoring statements from foreign leaders and illegal immigrants themselves citing the Biden administration's policies and rhetoric as the top factor at play. Vice President Kamala Harris' recent box-checking exercise of a "border visit" studiously avoided confronting the problem in any serious way, by selecting a sector that hasn't been plagued by illegal crossings in recent months. As a reminder of how things are really going in this non-crisis, read this:

For the first time since April of 2000, authorities stopped more than 180,000 illegal immigrants at the US-Mexico border [in May], according to data released by US Customs and Border Protection (CBP) Wednesday. The 180,034 apprehensions are an increase of fewer than 1 percent from April’s 178,854 apprehensions, but the high number highlights the ongoing severity of the migration crisis. It also surpasses preliminary data from CBP that was reported on by Axios earlier this week. In March, 173,337 illegal immigrants were apprehended, making this year the first in which at least 170,000 apprehensions were recorded in three consecutive months since 2000.

And this (the fiscal year began weeks before Biden's election, an event that triggered a massive surge in illegal immigration):

U.S. authorities have made more than 1 million arrests of migrants at the U.S.-Mexico border so far in fiscal year 2021, according to preliminary figures shared with Reuters, a tally that underscores the immigration challenges facing President Joe Biden. At the current pace, the total border arrests for the fiscal year, which ends on Sept. 30, would be the highest since 2000, when nearly 1.7 million migrants were apprehended by U.S. authorities. Biden, a Democrat who took office five months ago, has reversed many of the hardline immigration policies put in place by his Republican predecessor, former President Donald Trump.

Five months into President Joe Biden's time in office, the surge of unaccompanied children coming across the southern border shows no signs of slowing. The number of children traveling to the United States’s southern border has increased over the past week, suggesting a summertime wave may be on the horizon. More than 500 children were encountered daily by Border Patrol through much of March and April. After that, the number of daily arrivals dipped below 300, but it has increased again to top 530 on June 23. Nearly 15,000 children are being held at government facilities run by the Department of Health and Human Services, according to the most recent data released June 25. Approximately 2,000 more children were either found at the border, transferred from Border Patrol to HHS, or released into the country that day.

And in spite of the administration's empty warnings not to come to America, and insulting assertions that the border is "closed" and "secure," actions mean more. They've already loosened enforcement in major ways, including allowing illegal immigrants "freebie" additional crimes (drunk driving, simple assault) for which they won't be deported. Now they're mulling implementing another pro-illegal immigration incentive:

VP Harris says 'Do not come.' And now, news the White House is planning to end *all* expulsions of families that illegally cross into the United States. As they say, actions speak louder... From @axios https://t.co/DjeYI4YnNH

Meanwhile, on Capitol Hill, House Democrats marked up a bill this week that would reduce funding for border enforcement – in the middle of the crisis detailed above, and on the heels of the White House forcing out the leader of CBP for political reasons:

Immigration enforcement agencies, including U.S. Customs and Border Protection, would lose millions in funding under a House spending bill released Tuesday. CBP would get $14.1 billion in net discretionary appropriations, almost a billion dollars less than the current fiscal year and a half-billion dollars less than the White House requested, under the draft fiscal 2022 homeland security appropriations bill. U.S. Immigration and Customs Enforcement [ICE] would get $1.55 million less than fiscal 2021...Measure would rescind more than $2 billion from prior year appropriations for border barrier construction; it proposes no funding for additional Border Patrol agents or the border wall...

Democrats are the party that always wants to increase government spending on virtually everything. They angrily denounce slowing spending increases as "cuts" (and defend these rhetorical machinations) But three areas where they seem eager to make actual cuts and real reductions are on defense, law enforcement, and border protection. Instructive. I'll leave you with this quote from GOP Leader Kevin McCarthy's office: "We've long known that Democrats want to defund the police – now House Democrats will mark up a bill...in the House Appropriations Committee that defunds U.S. Customs & Border Protection and Immigration & Customs Enforcement. Make no mistake: President Biden’s border crisis is getting worse, and rather than address the problem, House Democrats’ answer is to cut resources from our immigration enforcement agencies."