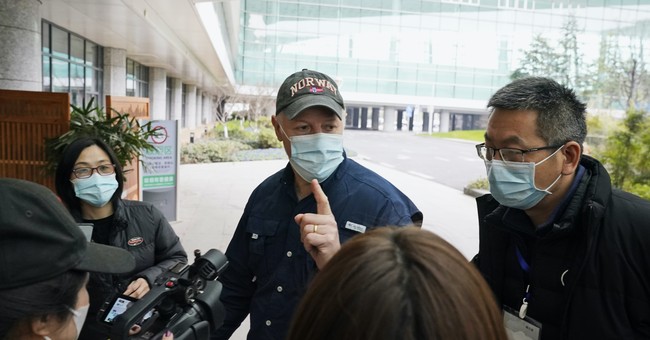 The name Peter Daszak made an eyebrow-raising appearance in the recently-released tranche of emails from Dr, Anthony Fauci.  Daszak sent a note to Fauci to thank the senior official for publicly swatting down the "myth" of the lab leak theory.  The email also criticized Fox News (where I work).  Fauci responded by thanking Daszak for his "kind note."  Who is this man?  National Review's Jim Geraghty calls him a "China apologist," pointing out that conflicts of interests have landed him in some relatively hot water.  Geraghty labels Daszak "the favorite American COVID-19 expert of Chinese-state-run media," citing the latter's willingness to advance baseless theories that exonerate Beijing.  This is the researcher who was expressing gratitude to Fauci for effectively rejecting the lab leak hypothesis (Fauci contends he never did any such thing), which has suddenly been revived as a topic of acceptable conversation after months of attacks and censorship:

This week, Daszak recused himself from the COVID-19 Commission established by the medical journal The Lancet — not over his public embrace of China’s implausible blame-shifting theories, but because of complaints he didn’t disclose past conflicts of interest in his contributions to that journal...the People’s Republic of China funds the laboratory doing the research on coronaviruses in bats in partnership with EcoHealth Alliance, and that the work of the EcoHealth Alliance in China is entirely dependent upon the continued approval of the Chinese government. So no, the president of EcoHealth Alliance is not someone who can be relied upon to declare when the Chinese government is being dishonest. His organization’s ability to continue its work in China is dependent upon him never saying something that will anger Beijing. That is a crystal-clear example of a conflict of interest that does not involve any direct payments from the Chinese government... Daszak is the only American citizen whom the Chinese would allow to visit Wuhan as part of the WHO investigation team; other American experts applied to join the team but were not selected, in a move many suspect was designed to placate Beijing. In a way, the Chinese government was really insulting Daszak by allowing him and barring other American scientists; it’s a de facto declaration that they perceive him as a pushover or an easy mark. Once Daszak arrived in China, he seemed spectacularly incurious and willing to believe whatever his Chinese-government handlers told him.

Like the World Health Organization itself, critics say Daszak is compromised and cannot be trusted to play it straight on issues pertaining to China, due to obvious conflicts of interest. The Chinese regime has a way of using its huge commercial market and financial might to influence governments and corporations, bending them to Beijing's will -- or at least "complicating" the application of values. For instance, Axios' Jonathan Swan more or less induced the Prime Minister of Pakistan to flatly admit that he doesn't complain about an anti-Muslim genocide in Western China -- despite speaking out aggressively against perceived Islamophobia in the West -- because of Chinese money:

.@jonathanvswan presses Pakistan Prime Minister Imran Khan on why he’s outspoken against Islamophobia in the West but silent about the genocide of Muslim Uyghurs in western China.

Khan: I concentrate on what is happening on my border.

Swan posed a question to Pakistani prime minister Imran Khan asking if his outspoken advocacy for Western Muslims was undermined by his defenses of the Chinese government’s human-rights abuses against Uyghurs. “This is not the case according to them,” Khan said of his government’s conversations with Chinese Communist Party officials about the treatment of Uyghurs. Then, he pivoted, calling China one of “the greatest friends to us” during an economic downturn. “We respect the way they are and whatever issues we have we raise behind closed doors.” ... The reasons for Pakistan’s cooperation with China on this are many. The obvious explanation — in fact, the one that Khan himself makes — of Pakistan’s abiding support for Beijing’s crimes against humanity stems from China’s patronage of the country. The longstanding bilateral relationship has paved the way to significant economic engagement, including, most recently, plans for a $62 billion Belt and Road Initiative economic corridor to connect China with Pakistan’s Gwadar port. Unsurprisingly, China is the largest source of foreign direct investment in Pakistan, even without counting funding related to the economic-corridor project.

Here at home, we've written about major American companies who kowtow to China, hoping to preserve access to the Communist nation's lucrative, billion-plus person market. We've mentioned Nike, Disney and the NBA, among others. This anecdote reported by the Wall Street Journal is also illustrative:

Corporations will always adopt the postures that make them money. The reverse is true too:https://t.co/hEj5Hh6MZ2 pic.twitter.com/SWY5BEJb7h

Spooked by a rival getting blackballed for criticizing China's barbaric forced labor practices, this company erased a similar expression of concern from the internet. After deliberations, a shorter statement was eventually posted. Why the equivocation and angst? Money. Bear in mind that North Face recently refused to produce custom jackets for an American oil and gas company, ostensibly due to their "values." An oil and gas association retaliated by awarding North Face 'extraordinary customer' honors, just to highlight the hypocrisy at play. But North Face's preening isn't unusual; corporations are happy or eager to flex their "socially conscious" muscles for a domestic audience, but when it comes to China's egregious human rights abuses (not to mention environmental devastation), things get...complicated.  And as the CCP cracks down on Hong Kong's film industry and news media, I'll leave you with the latest example of the democratic life being illegally squeezed out of Hong Kong:

Hong Kong starts being pulled inside the Great Firewall. https://t.co/UTsyTkmPn1

Reminder: Amid COVID lies and cover-ups with millions dead, an active genocide, and flagrant violations of international law in Hong Kong, the 2022 Beijing Olympics are proceeding on schedule.