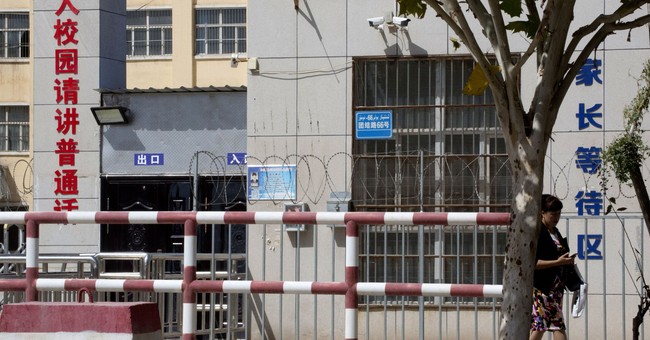 No one should or will be surprised by this, but it's an outrage nonetheless.  The Chinese Communist Party's egregious human rights record is one of the worst on earth, and the evidence continues to mount.  The forced labor issue is already on America's radar screen, with Congress moving to crack down, despite objections from some major corporations -- including the phony woke stars at Nike.  There's now mounting evidence that the regime's concentration camps and forced labor practices overlapped:

For the first time, satellite photos confirm China has built acres of factories inside the compounds, facilitating forced labor on a vast scale. https://t.co/ZzSeA5Ho8V

China has built more than 100 new facilities in Xinjiang where it can not only lock people up, but also force them to work in dedicated factory buildings right on site, BuzzFeed News can reveal based on government records, interviews, and hundreds of satellite images. In August, BuzzFeed News uncovered hundreds of compounds in Xinjiang bearing the hallmarks of prisons or detention camps, many built during the last three years in a rapid escalation of China’s campaign against Muslim minorities including Uighurs, Kazakhs, and others. A new analysis shows that at least 135 of these compounds also hold factory buildings. Forced labor on a vast scale is almost certainly taking place inside facilities like these, according to researchers and interviews with former detainees.

It is the duty of all Western and pro-human rights governments -- led by the United States -- to ensure that effective slave labor is not rewarded in the global marketplace. The US State Department is rightly highlighting China's ongoing abuses:

Since 2017, more than one million individuals have disappeared into the Chinese Communist Party’s internment camps in Xinjiang. Many families still have no idea if their loved ones are even alive. We are sharing their stories at https://t.co/YTsl27KzK5. pic.twitter.com/KP2zYWtsBV

Does Disney have any comment on any of this, perchance?  Don't hold your breath.  And with all of this as a backdrop, let's not forget this disgraceful, sick joke about to play out at the United Nations:

One week from tomorrow, a man who herded 1 million Uighurs into camps, jails human rights activists, crushed Tibet, disappeared courageous men and women who sounded the alarm on the coronavirus, and suffocated freedom in Hong Kong will join the U.N.'s highest human rights body. pic.twitter.com/j4iSBOOnlk

China is jailing journalists for problematic reporting about the virus the regime unleashed on the world through lies and cover-ups, as it hers minorities into concentration camps and forces them to perform slave labor -- all while stamping out democracy in Hong Kong, in violation of international law.  Sounds like a great candidate for the Human Rights Council (along with these guys).  I'll leave you with Sec. of State sending a message to the Communists over Christmas, standing up for religious liberty and for our Australian allies (who are being bullied by Beijing):