Question for 'Progressive' Senator: Hey, Why Do You Still Belong to an All-White Club? 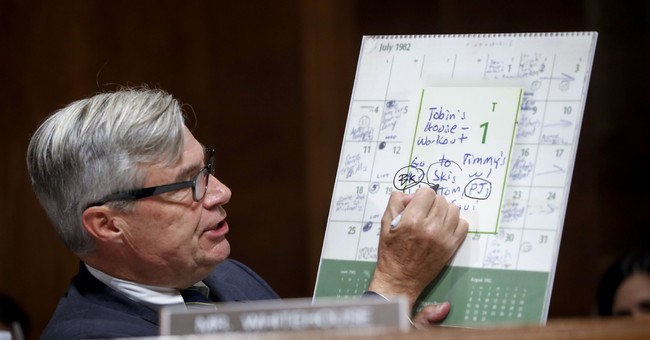 We're all familiar with Sheldon Whitehouse, yes? He's the buffoonish, conspiratorial Democratic senator from Rhode Island who rails against "dark money" in politics – except for left-wing dark money that benefits him and his allies, that is. He is also the Judiciary Committee member who distinguished himself as the most humiliatingly cringe-worthy performer during the Kavanaugh confirmation fiasco, obsessing over fart jokes and drinking games. During the Barrett hearings, Whitehouse helped carry the torch for Democrats' bogus attack line that if confirmed, ACB would rip away Americans' healthcare by casting the deciding vote in a pending Obamacare challenge considered by many analysts to be a long shot. That ruling was released last week, and Justice Barrett was among the seven justices rejecting the challenge. Did that decision inspire even a nanosecond of self-reflection in Sen. Whitehouse? Of course not:

"If we hadn’t done that, maybe they would have" killed the law, Whitehouse said. "It may be (saved) because we did so many warnings."

The clown factor is exceedingly high in this senator. But as a preening "racial justice" crusader who has inveighed against America's "systemic racism," a certain revived line of inquiry must be very awkward, even for a man with little-to-no capacity for shame. It turns out that for many years, Whitehouse and his family have been members and investors in an all-white beach club. In fact, this issue bubbled up earlier in his political career, and Whitehouse promised change. There has been no change, via this update in 2017:

GoLocalProv.com News Editor Kate Nagle finally caught up with U.S. Senator Sheldon Whitehouse (D-RI) to ask him about his family’s membership in the exclusive and all-white Bailey’s Beach Club. In 2006, when Whitehouse ran for the United States Senate, he reportedly promised to quit his memberships in Bailey's, as well as the all-male, all-white Bellevue Avenue Reading Room. However, eleven years later, a GoLocal investigation has uncovered that Whitehouse has consolidated his ownership with his wife in Bailey's, one of America’s oldest and most exclusive beach clubs.  After weeks of refusing to answer GoLocal’s questions about his membership in Bailey’s — Nagle caught up with Whitehouse attending an event in Newport.  “I think it would be nice if they (Bailey’s Beach Club) changed a little bit, but it's not my position,” Whitehouse told Nagle. When asked if he would pressure the club to push for diversity at the all-white club], Whitehouse said, “I will take that up privately.” He then told Nagle he had no further comment and walked away.

So when he was running for Senate 15 years ago, Whitehouse pledged to quit his memberships in two all-white clubs. More than a decade later, far from quitting, he'd deepened his financial ties to the beach club, mumbling about how it would be "nice" if his cozy, privileged clique admitted some non-white members at some point. Would he take a stand? No. He'd "take that up privately." Four years later, how's that private lobbying/diversification effort going?

SHELDON WHITEHOUSE, his wife & their families have been members of an all-white private beach club for decades.

“It’s a long tradition in Rhode Island & there are many of them & I think we just need to work our way through the issues,” @SenWhitehouse said https://t.co/EA7rnkRiAX pic.twitter.com/gwaphKBYWq

Ah. It's a "long tradition," you see. Perhaps they'll "work our way through the issues" at some point. Give them another decade or three. On what planet does Whitehouse think invoking the longstanding tradition of excluding people of color is a good answer to this challenge? Especially having totally broken every promise he's made on this front for years? Perhaps the planet where he believes that being an aggressive left-wing Democrat in a very blue state inoculates him against the sort of blowback this type of thing would trigger against a conservative Republican. Call it Democrat Privilege, if you will. But this is so egregious; I wonder if his water-treading nonsense is sustainable. This comparison comes to mind:

Ellie Kemper had to issue a groveling apology because she won a pageant crown in 1999 from a group that was segregated decades prior.

Sheldon Whitehouse belongs to a club that is *still all-white TODAY* (after promising to quit years ago) & his response is “it’s a tradition.”???????

There hasn't been a huge media feeding frenzy about Whitehouse yet, and certainly no "national conversation" about it, so maybe he's made the right bet. He still might want one of his comms staffers to draft a statement of prostrated, abject regret, just in case. How does he square his "systemic racism" pontifications with his own conduct, unless he'd argue that his own club proves the point? Somewhat relatedly, I'll leave you with this story – and I'll encourage all left-wing groups to truly take ownership of their own systemic racism by disbanding forthwith:

A New Zealand chapter of Greta Thunberg-linked climate movement disbands itself for being ‘racist’ https://t.co/QoXPAmO0jQ

More "progressive" self-cancellation, please. Maybe we can start with you, Senator Whitehouse.