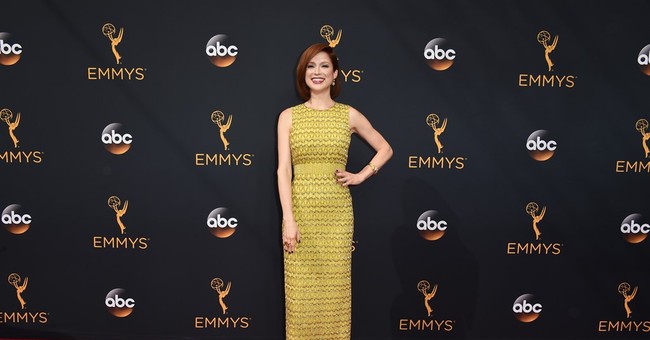 I wouldn't call myself a fan of actress Ellie Kemper, per se, but I enjoyed her work in "Unbreakable Kimmy Schmidt" and "Bridesmaids." When the recent "controversy" emerged, related to something she'd done back in 1999, a quick perusal of the facts made clear that some of the incredibly ungenerous and hyperbolic headlines – linking her to segregation, the KKK, and the like – bore little resemblance to the facts of the case.  The facts are these: As a 19-year-old college student and the daughter of a prominent banker, Kemper was crowned the winner of an annual debutante ball in the St. Louis area. The organization that put on the event has a racist past, but had integrated decades prior to Kemper's involvement. Here is how USA Today describes the gala in question:

The Veiled Prophet Organization, which originated in the late 1800s as a group of wealthy business owners in St. Louis, still holds an annual debutante event called the Veiled Prophet Ball, in which the daughter of one of the group's members is crowned queen by a "Veiled Prophet," a secret member who wears white robes and a white veil covering his face... "Each year, approximately sixty to seventy young women are chosen for their outstanding community service efforts and walk down the magnificent 72-foot-long Veiled Prophet runway in fashionable couture gowns, and in front of family and friends, are presented and honored for their contributions," reads an event description from the Veiled Prophet organization's website.  A 1999 archived article from the St. Louis Post-Dispatch announced that "Elizabeth Claire 'Ellie' Kemper, 19, (was crowned) the 1999 Queen of Love and Beauty" at that year's Veiled Prophet Ball while she was a freshman at Princeton University.

Why should Kemper have felt any pressure whatsoever to apologize for this, aside from the obvious reality that negative stories were being written about her association with a formerly racist organization? She understandably wants the issue to go away and to protect her successful career in Hollywood, so she did what is required under the current, capricious rules – grovel, self-flagellate, and repeat woke aphorisms about one's own privilege:

“Hi guys - when I was 19 years old, I decided to participate in a debutante ball in my hometown. The century-old organization that hosted the debutante ball had an unquestionably racist, sexist and elitist past. I was not aware of this history at the time, but ignorance is no excuse. I was old enough to have educated myself before getting involved,” she wrote in a five-slide post Monday. “I unequivocally deplore, denounce, and reject white supremacy. At the same time, I acknowledge that because of my race and my privilege, I am the beneficiary of a system that has dispensed unequal justice and unequal rewards,” she continued.  “There is a very natural temptation, when you become the subject of internet criticism, to tell yourself that your detractors are getting it all wrong. But at some point last week, I realized that a lot of the forces behind the criticism are forces that I’ve spent my life supporting and agreeing with. I believe strongly in the values of kindness, integrity, and inclusiveness. I try to live my life in accordance with these values. If my experience is an indication that organizations and institutions with pasts that fall short of these beliefs should be held to account, then I have to see this experience in a positive light,” Kemper added. “I want to apologize to the people I’ve disappointed, and I promise that moving forward I will listen, continue to educate myself, and use my privilege in support of the better society I think we’re capable of becoming.”

But as I asked in a Fox News segment on this kerfuffle, is there any limiting principle to the scope of actions or connections that stir angry cries for such apologies? What about statutes of limitations on timelines? The Veiled Prophet crown was bestowed upon Kemper more than two decades ago ("the entire celebration was renamed Fair Saint Louis in 1992," according to the Los Angeles Times) – which, in turn, was two decades after the group de-segregated. How many Americans are involved with organizations or institutions with racist histories? How many of us work for companies that used to have problematic practices on race? How many of us attended schools that were once segregated, or had "problematic" mascots? Where are the lines of acceptability drawn, especially involving contemporary punishment for sins of the past? It often seems as though the accusatory mob makes the regulations up on the fly. In our on-air discussion, I also mentioned this interesting observation:

As recently as 2020, Ellie Kemper gave money to a political organization that was historically dedicated to the preservation segregation *and* slavery. pic.twitter.com/eaIbRcS3Cj

I added that within Kemper's lifetime, this same organization selected a senior leader who had once served as a local leader within the Ku Klux Klan (not a Grand Wizard, as I stated), which the man later acknowledged and apologized for. The Democratic Party's members and defenders would say that its dreadfully racist past is hardly relevant to the debates and dynamics of today, and that so much has changed. But under the standards applied to Kemper's college-era ball, why should any of that matter? Why shouldn't Kemper – and the legions of celebrities who donate to Democrats – have to explain themselves and acknowledge their connections to a group with a painful history of outright racism and sexism? Of course, these are unserious, trolling questions, but they do help illustrate a point about how absurd this historical guilt by association can get.

No one is accusing Ellie Kemper of any racist actions. They harangued her into an apology because she participated in something put on by an organization that had been bad many years prior but had undergone major reforms and rebranding prior to her involvement. If that's a borderline-cancelable transgression requiring a lengthy apology, many, many other things are, too. I'll leave you with the conversation mentioned above, which also addressed the bizarre new "race card" feature brought to us by...National Geographic, of all places. Some people may view preemptive announcements of pronouns and racial identity as signs of "progress." Respectfully, I do not: