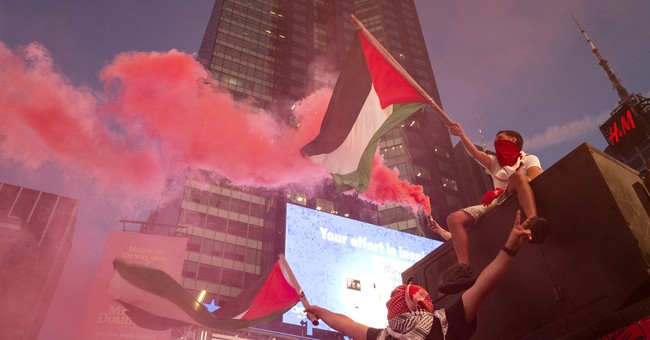 The Democratic Party is engaged in an internecine fight over Israel, with more traditional and old guard Democrats supporting the world's lone Jewish state -- a clear disconnect from to the overt hostility of the rising leftist base.  Not only are more 'progressives' evincing aggressive opposition to Israeli policies, including rudimentary self-defense, nakedly eliminationist rhetoric is becoming increasingly acceptable in some circles.  Outright anti-Semitic rhetoric and violence is spiking, with some lawmakers proving unable to explicitly condemn this ancient hatred in isolation, opting to lump it in with other forms of bigotry, seemingly to avoid inflaming some of their fanatically 'anti-Zionist' supporters.  Notice how many social media posts simply condemning anti-Jewish hate or violence generate responses attacking Israel or supporting "Palestine."  They're telling on themselves.

The occasion for the current controversy is, ostensibly, a legal battle that has been deeply distorted by many of Israel's critics.  This case served as the most recent excuse for Hamas, the terrorist organization that took over Gaza after Israel unilaterally withdrew from the territory in 2005 in pursuit of peace, to shoot 4,300 rockets at Israel, hoping to murder as Jewish civilians as possible.  Israel defended its people with extremely targeted counter-strikes (even a top official at the chronically Israel-fixated United Nations admitted as much, before apologizing), in which the IDF took great care to minimize collateral damage.  Increasing the likelihood of collateral damage by launching attacks from crowded neighborhoods, schools, hospitals, and the like is part of the Hamas playbook, of course.  Many Westerners look at these efforts by a liberal democracy to neutralize a genocidal terrorist threat against innocent people and decide that the liberal democracy is the true villain.  This twisted mentality is an outgrowth of identitarianism, which reduces everything to lazy calculations of race and perceived "oppression."  Two recent polls show that more self-identified Democrats sympathize with the Palestinians over Israel:

Q has been bad, but Dems side with Palestinians over Israel by 21 points (!) in this poll — YouGov also showed Dems leaning against Israel, but by a smaller margin. https://t.co/wZYXTMF8iD

As I noted in my tweet, Quinnipiac has been just awful in recent cycles, badly overestimating Democratic support in may big races, but their survey interestingly doesn't give people a "both sides" option, unlike YouGov.  In the latter poll, Democrats break toward the Palestinians by single-digits; in the former data set, which pushes respondents to choose a side, the pro-Palestinian margin expands substantially.  It's hard to argue against the proposition that the Democratic Party is increasingly anti-Israel, with a lot of blue-leaning equivocators falling into the Zionism-skeptical camp.  Among the broader American public, however, support for Israel is strong:

A majority of Americans said the Islamist militant group Hamas is responsible for the recent violence in Israel and the Palestinian territory of Gaza, according to polling data. In a Harvard CAPS-Harris Poll survey shared Monday with The Hill, 60% of respondents said Hamas is responsible for the recent violence while 40% said Israel is responsible. Hundreds of people have been reported dead after Hamas launched rockets into Israel earlier this month and Israel launched retaliatory airstrikes at Hamas-controlled targets in Gaza.

Another, via Fox News and Ed Morrissey at Hot Air:

Most American voters side with Israel in the Mideast conflict, and over half favor the United States helping with money and weapons, according to the latest Fox News survey. By a 56-38 percent margin, voters approve of providing the Israeli government with financial aid for its military, and are almost as supportive on selling weapons to Israel (51 percent favor, 44 percent oppose)...In general, 59 percent of voters say they side more with the Israelis, while 24 percent sympathize with the Palestinians...Support for Israel outstrips support for the Palestinians in every demo, and for the most part by outright majorities. The narrower pluralities come among blacks (44/37), Hispanics (48/36), those under 45 (46/38). Even a plurality of Democrats support Israel (42/35) and a majority of urban voters (50/32). Independents support Israel by almost a 2:1 margin at 53/28.

As noted, Democrats narrowly side with Israel in this poll, but it's close. The fight within the lefty coalition is real, and younger generations are trending in a dark direction.  I encourage you to read this thread on a group of House Democrats who have indirectly fired back at the Squad, which has an anti-Semitism problem, over its blizzard of anti-Israel libels -- even as Democratic leadership seems to be protecting the bigots, likely understanding how many of their supporters are on their side:

But right now Pelosi/Hoyer made a clear choice: the squad has the protection of the leadership, no one touches them. So because of that it's impossible to argue it's not mainstream Dems at least knowingly enabling the hate. That tars Gottheimer and others, who aren't bigots.

Do Israel's evils know no bounds?

Israel is so much of an apartheid state that the niece of Hamas leader Ismail Haniyeh received a bone marrow transplant in Tel Aviv. She was there as Hamas launched 4000 rockets at Israeli civilians & continues to receive care.

I'll leave you with a Biden/Harrris campaign adviser shamefully recommending that American Jews who fear for their safety in the face of assaults from 'anti-Zionists' remove identifying religious garb or icons.  This is not America:

And if you were a Jewish parent in San Francisco, would you feel comfortable keeping your kids in public schools run by this union?

.@SenSchumer has rightly called BDS fundamentally anti-Semitic. Does @SpeakerPelosi agree? This union-endorsed bigotry is in her district. https://t.co/2Iv8IBGXfc

They haven't shown up for work in a year, but they sure have time to embrace a fundamentally anti-Semitic campaign.  What a disgrace.  And we know who they vote for.