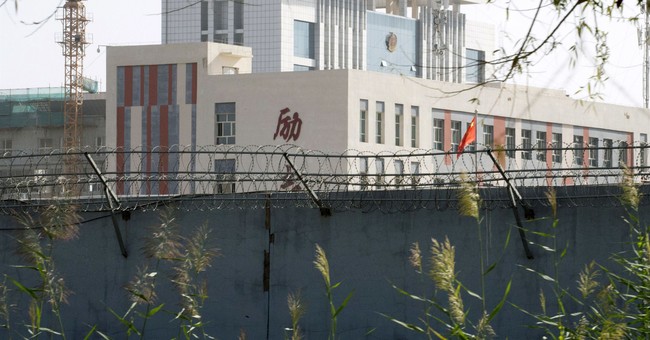 While much of the world, particularly self-declared "progressives" are training their scorn on the world's lone, tiny Jewish state – repeating outrageous slanders like "genocide" and "apartheid" in order to attack Israel for defending itself against an onslaught of rocket attacks designed to murder their civilians – actual genocide, ethnic cleansing and systemic racism continue to occur inside Communist China. The forced abortions and sterilizations are having their horrifying intended effect:

Coercive policies in China's far western region of Xinjiang have led to a sharp decline in birth rates for Uyghurs and other minorities, which could add to evidence of genocide, an Australian think tank said in a report released on Wednesday. The Australian Strategic Policy Institute (ASPI) report, citing official Chinese data, said that there has been an "unprecedented and precipitous drop in official birth-rates in Xinjiang since 2017," when China began a campaign to control birth rates in the region.

Ample evidence has led the US State Department to declare a genocide underway, with more proof emerging on a regular basis. Via the UK Daily Mail (content warning):

A survivor of one of China's modern-day concentration camps has revealed the beatings, rapes and 'disappearances' she witnessed behind the barbed wire.  Sayragul Sauytbay was born in China's north-western province and trained as a doctor before being appointed a senior civil servant. As a Kazakh she belonged to one of China's ethnic minorities who lived in what was known as East Turkestan until it was annexed and renamed Xinjiang by Mao Zedong in 1949. The mother-of-two's life was upended in November 2017 when she was ordered into a concentration camp to teach prisoners, mostly Kazakhs and Uyghurs, in one of the region's estimated 1,200 gulags...The internment camps of Xinjiang are estimated to house three million Kazakhs and Uyghurs who are subjected to medical experiments, torture and rape...Sauytbay saw evidence of organ harvesting and recounts an 84-year-old woman having her fingernails pulled out after she denied making an international phone call.  She was made to watch guards pack-rape a woman in her early 20s after she had confessed to texting Muslim holiday greetings a friend when she was in Year 9. Sauytbay was literally forced to sign her own death warrant, agreeing she would face the death penalty if she revealed what happened in the prison or broke any rule.

Everyday horrors that are unspeakably appalling, yet are occurring actively, right now. The CCP is ham-fistedly trying to deny reality by coercing Uighur Muslim minorities into denying the genocidal violations with which their community is being targeted. People will say virtually anything at gunpoint:

A text sent to the @AP suggests that videos showing Uyghurs praising the Chinese Communist Party and denying genocide in Xinjiang were not made voluntarily. @dakekang https://t.co/XuzpxB9zkn

China has highlighted an unlikely series of videos this year in which Uyghur men and women deny U.S. charges that Beijing is committing human rights violations against their ethnic group. In fact, a text obtained by the AP shows that the videos are part of a government campaign that raises questions about the willingness of those filmed. Chinese state media have published dozens of the videos praising the Communist Party and showing Uyghurs angrily denouncing former U.S. Secretary of State Mike Pompeo for declaring a genocide in the far west Xinjiang region. The videos, which officials have insisted are spontaneous outpourings of emotion, have also featured prominently in a series of government news conferences held for foreign media. But the text obtained by AP is the first concrete confirmation that the videos are anything but grassroots. Sent in January to government offices in the northern city of Karamay, the text told each office to find one Uyghur fluent in Mandarin to film a one-minute video in response to Pompeo’s “anti-China remarks.” ... China’s track record in Xinjiang and its documented abuses of Uyghurs have led many experts to conclude it’s more likely those in the videos were forced to take part.

It's clumsy propaganda. Obviously. Speaking of pro-Beijing propaganda, a recent report in the Hollywood Reporter reveals how Disney has actively sought to appease the CCP in various ways. We already knew about their groveling statements of appreciation for the honor of being allowed to film Mulan in the very province where the concentration and forced labor camps are being run – and we knew about Hollywood's willingness to censor content in films in order to align with CCP sensibilities. The minorities being forced to film videos denying their own people's subjugation are at least doing so out of abject intimidation and fear for their own lives and safety. Disney et al are giving cover to the regime in order to maximize profits through access to the lucrative Chinese market. This censorship anecdote in a piece about the precarious Tinseltown/CCP alliance is infuriating, yet not overly surprising:

In the run-up to Chloé Zhao’s historic best director win for Nomadland at the 93rd Oscars, Disney began tiptoeing around potential land mines with regard to China, the director’s home country and the studio’s most important international market. “Please note in your ongoing coverage of Nomadland that Chloé Zhao is a Chinese filmmaker,” an executive for Disney-owned Searchlight emailed members of the Hollywood press on March 4. “You may accurately refer to her as Chinese or a Chinese National.” ... For months, the studio had been making clandestine efforts to avoid agitating the Chinese Communist Party when it came to Zhao, who was born and raised in Beijing but attended high school in London and Los Angeles and college in Massachusetts and New York. The simple fact that she now lives in Ojai, California, was certain to irk the CCP and provoke China’s notorious internet ultranationalists, whose M.O. is to aggressively scrutinize any Chinese artist who achieves significant success in the West — searching for hints of disloyalty to the motherland.

Sources say that in late 2020, a Searchlight publicist persuaded the small, New York-based Filmmaker magazine to remove a quote from a 2013 Zhao profile in which the budding auteur explained the inspiration for her first feature film, Songs My Brother Taught Me, about a Native American teenager looking for escape from the tough conditions of South Dakota’s Pine Ridge Indian Reservation. “It goes back to when I was a teenager in China, being in a place where there are lies everywhere,” she said. “You felt like you were never going to be able to get out. A lot of info I received when I was younger was not true, and I became very rebellious toward my family and my background. I went to England suddenly and relearned my history. Studying political science in a liberal arts college was a way for me to figure out what is real. Arm yourself with information, and then challenge that too.” In most contexts, Zhao’s remarks — an ambitious young artist reflecting on the memories of teenage angst and rebellion that inform her work — would be innocuous. And if it weren’t already de rigueur for the American film industry, Disney’s behavior would be a scandal — the United States’ most iconic media brand, going out of its way to preemptively aid an authoritarian government in censoring an artist’s interview with an American media outlet.

"Disney and Filmmaker declined to comment," the story continued. Oh, I bet they did decline to comment. An American media company going out of its way to erase the deeply personal words of a woman of color because her accurate point about her own lived experience might rankle the authoritarians in Beijing. This is redolent of people being thrown out of NBA arenas, including during the US national anthem, because they were peacefully protesting another element of egregious CCP abuse. And just to round things out, there are growing indications that the COVID "lab leak" theory widely dismissed among elite media as a supposed "conspiracy theory" (even talking about the Chinese origin of the pandemic was considered problematic or racist by some of the same people who don't hesitate to fuel an environment in which Jews are being beaten in the streets of Western cities) is actually very much viable. Even Dr. Anthony Fauci, who'd been among the dismissers, is now changing his tune and hedging significantly:

Worth noting that the evidence has not changed significantly since his previous statements. https://t.co/kxAshqhpFu

Three Wuhan Institute of Virology researchers became sick enough in November 2019 that they sought hospital care, according to a U.S. intelligence report that could add to calls for a fuller probe of whether the Covid-19 virus may have escaped from the lab https://t.co/kzvVbFQZDf

China has repeatedly covered up the truth, lying incessantly about the virus, punishing whistleblowers, and bullying countries who ask too many questions. Yet the vaunted "international community" is about to hand China the prestigious platform of hosting the Olympic games, mid-genocide. No wonder the CCP operates so brazenly. I'll leave you with Disney's publicists placing yet another "first gay character!" story to generate fawning headlines domestically, while running everything else past Chairman Xi for approval: