Final Stretch: Who's Winning in Georgia? 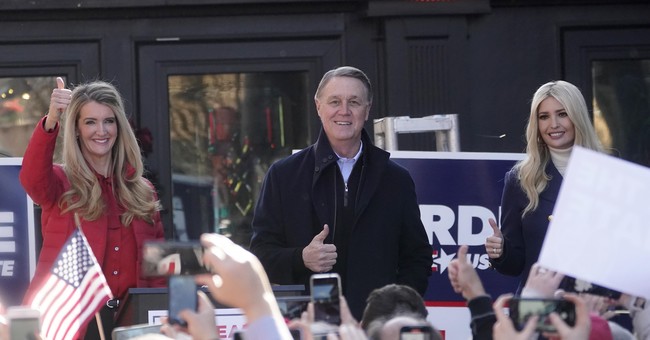 We are less than one week out from the monumentally important Georgia Senate runoffs -- and to some extent, it feels like we're flying blind.  Polling is scant and unreliable, and the upheaval in Washington over COVID relief is an added X-factor as the races come down the home stretch.  Democrats are sounding publicly bullish, citing claims that they're turning out tens of thousands of new left-leaning voters who didn't vote in November.  But NBC News reported earlier this week that Senate Minority Leader Chuck Schumer is feeling "pessimistic" about his party's chances in Georgia next Tuesday, "and doesn't want to ruin donor relationships" by pumping them to commit more money to the state, according to a source (a Schumer spokesperson adamantly denied this).  Where do things actually stand?  It's impossible to say for sure, but here is what I'm hearing from sources on the ground and other well-connected people:

(1) Everyone acknowledges that these contests are very close, and far tighter than Republicans would like to see.  In our initial analysis of these races, we noted the historical trend that the Georgia GOP has almost always prevailed in statewide runoffs.  We also specifically pointed out that in the last US Senate race to get pushed into a runoff, the Republican went from holding a relatively narrow lead in the general (+3) to winning a relative blowout (+15).  These races are not shaping up to follow quite the same pattern.  GOP sources remain pretty optimistic about their chances to edge out victories, but nobody is talking about runaway wins for David Perdue or Kelly Loeffler on Tuesday, especially in light of internal turmoil within the party.

(2) One solid source inside one of the GOP campaigns evinced cautious but clear confidence in a phone call earlier today.  This person said that in spite of Democrats crowing to the press, Republicans have been tirelessly and relentlessly putting in the work on voter outreach and other crucial elements of their ground game.  They feel like they are hitting their marks in terms of where they need to be at this stage of the process (this source noted that early voting closes tomorrow, but in some rural counties, it ends today).  That said, a very strong turnout on election day itself -- when conservatives tend to vote -- will be necessary to overcome any early advantages Democrats have built up.  'We feel good, but we need to finish the job,' was the overall message.  Will President Trump's closing rally in deep red northwest Georgia on Monday help?  "Yes."

(3) As I mentioned above, trustworthy polling of the runoffs has been hard to come by.  Some data has looked promising for the GOP, other numbers have not.  Another source I heard from passed along some internal data (not from either campaign) showing a solid majority of Georgia voters opposed to unified Democratic control of Washington (this echoes the sentiment of the country writ large).  The same survey gave each Republican incumbent a modest lead in the low-to-mid single digits.  Take that for what it's worth, with all the magnified polling caveats firmly in place.

(4) Erick Erickson is an extremely well plugged-in radio talk show host in the state.  He knows Georgia politics and all the major figures on the Republican side of the aisle, and has Democratic connections, too.  His latest analysis of the state of play largely reflects what I'm hearing, but with more detail:

I still think the GOP is going to win Georgia. Here’s why: https://t.co/WO9KZ4Xf8S

By my review of the data, I think it is going to be close but the GOP maintains an edge...The supposed big wave of new voters is not that big and looks to be older and white, which looks Republican...The underlying fundamentals of the races have not changed. Perdue would have crossed 50%, but for a Libertarian candidate and Loeffler very well could have passed 50% had she not had to fight off a challenge from Doug Collins. The explicit Republican candidates got over 49% in the Loeffler-Warnock race and the explicitly right-of-center candidates topped 50%. The GOP exceeded fifty percent statewide in congressional and state legislative races. A majority of Georgia voters favor divided government, Warnock’s negatives are now the highest of any of the candidates, and Ossoff taking money from China has had a measurable impact on persuadable voters — more so than alleged insider trader by Perdue and Loeffler. Democrats have not changed the fundamentals in the last month nor have they turned off the GOP from wanting to vote. Runoffs are base elections. The only thing the Democrats have done is get their base out early and used it to generate a sympathetic media narrative. Republicans in Georgia tend to show up in large numbers on election day and January 5th is expected to be in the sixties and sunny. It will be closer than the GOP wants, but I still think they win.

Erickson's claim about 'new' voters seems to contradict what Democrats like Stacey Abrams (whose sister, a judge in Georgia, just issued a very controversial ruling about purging the voter rolls of non-residents) have been saying. We'll see who's right soon enough. For Erickson and my sources to be right, Republican-leaning voters need an all-hands-on-deck final push to get it done.

(5) And since Raphael Warnock's rising negatives were referenced in the excerpt above (see here), I'll leave you with this brutal new ad from the NRSC on this subject: