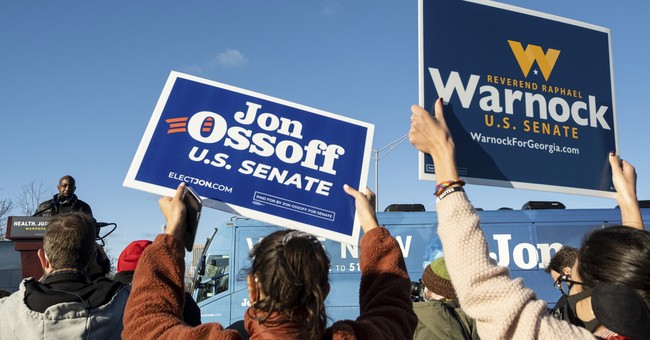 Plugged-in Georgia political commentator and radio host Erick Erickson recently joined my radio show and sounded guardedly bullish about Republicans' chances in the January 5th Senate runoffs (early voting for which is currently underway).  In a new online post, Erickson expounds on what he's seeing and hearing, and it's more convincing than a handful of potentially-unreliable polls, which we told you about yesterday. "Right now, it appears if the election were held today, the Democrats would win because of their early vote. But the GOP has gotten it closer than they did in the general and will surge into election day. Because the GOP is keeping early voting close, they’ll most likely cross the finish line on January 5th ahead of the Democrats," Erickson writes.

He lists seven reasons why he's feeling increasingly confident, including some data showing that while Republicans still "lag behind Democrats in early voting, the lag is not as dramatic as it was in the general election. In fact, if the GOP pacing holds up combined with their typical turnout in runoff elections, they should be able to offset the Democrats and win. Click through to read them all, but here are some of the key takeaways:

Second, voters who did not vote in the general election are showing up. So far, about 20,000 or so new voters who were not in the general are coming. They appear mostly in the northern suburbs of Atlanta in Republican territory...Third, Warnock’s negatives have skyrocketed. No one really took him on in the general election because Collins and Loeffler had to attack each other to get the chance to go after Warnock. While the media has mocked Loeffler for always calling Warnock “Radical Raphael Warnock,” her attacks are working. Georgia has 159 counties and the sheriffs from 98 of those counties, including some major metro Atlanta counties, have come out swinging for Perdue and Loeffler against Warnock and Ossoff. People in Georgia listen to their sheriffs...

Fourth, Ossoff continues to underperform with black voters...Fifth, Republican voters who think the presidential race was stolen are now showing up en masse. The President and Vice President have urged them to make one last stand and they appear to be ignoring the fringe voices in favor of the President...Seventh, Joe Biden made the fatal mistake of nationalizing the race in Atlanta. At his rally, Biden told Georgia Democrats he needed them to take the Senate for his agenda. Republicans have already turned this around and are targeting Republicans with Biden’s own words. It is firing up the GOP base.

As the GOP ties the unaccomplished Ossoff to China, Loeffler's task of framing Warnock as a radical liberal has been aided by Warnock's long history of radical statements.  Loeffler doesn't need people to take her word for it; she can just roll the tape.  Here's Warnock dodging questions about the anti-American hate rally with Communist dictator Fidel Castro at a church where he was a pastor.  Warnock has refused to say whether he attended.  This 'Fidel Who?' schtick is obviously evasive and revealing:

And now we're learning that Warnock invited and hosted Jeremiah Wright as a guest preacher at his church in 2014 -- on the day before the anniversary of 9/11, a terrorist attack that Wright infamously described as "America's chickens comin' home to roost."  Warnock defended Wright's notorious "God Damn America" sermon as "very fine," so it's no wonder that he'd want to share such bile with his own congregation:

Keep in mind that Warnock is trying to make a huge deal out of Loeffler unwittingly posing for photos with random racists, whom she has powerfully disavowed after learning who they were.  That's a brazen line of attack, given Warnock's knowledge that he and his churches have knowingly and deliberately chosen to celebrate Fidel Castro and Jeremiah Wright:

all politicians pose with randos for photographs. not all politicians are pastors at churches that *knowingly* host communist dictators for anti-American hate rallies. https://t.co/buCL742DEF

It's crazy that Raphael Warnock was trying to go after Loeffler for random people she took pictures with given some of the people he has knowingly and intentionally chosen to associate himself with. https://t.co/Dqh6X6oREv

I'll leave you with my recent discussion with Georgia's embattled Republican governor, Brian Kemp, as well as Team Perdue's latest ad leaning into the China issue:

I was honored to join the @GuyBensonShow today. Thanks for having me on, @guypbenson! https://t.co/SlwbyljOrG