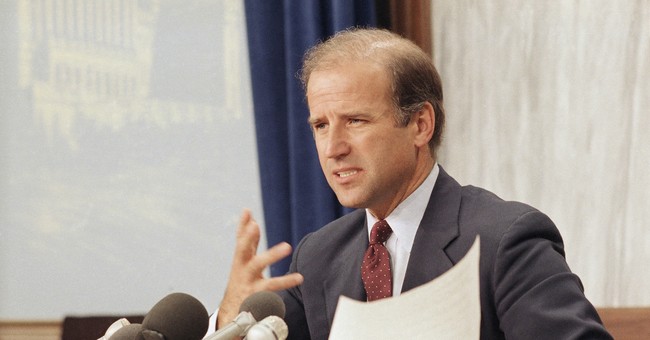 With Donald Trump, there's always a tweet. With Joe Biden, there's always a speech. As he clumsily ducks questions about court-packing, lies about the meaning of that term, and falsely defines constitutionality, Biden is refusing to explain his view on a radical scheme that would add seats to the US Supreme Court. But throughout his career, Biden has been a consistent critic and opponent of any such proposal. As a presidential candidate in the current election cycle, he rejected this litmus test by some on the hard Left:

"No, I’m not prepared to go on and try to pack the court, because we’ll live to rue that day,” Biden told Iowa Starting Line in July. At the October debate, Biden said, “I would not get into court packing. We add three justices; next time around, we lose control, they add three justices. We begin to lose any credibility the court has at all.”

He was right then, just as he was right in 1983 when he (now-famously) called President Roosevelt's attempted court-packing power grab "boneheaded" and "a terrible, terrible mistake:"

Perhaps Biden's most stirring and full-throated condemnation of court-packing came in a 1987 speech in which the then-senator favorably quoted Senate Democrats' powerful repudiation of FDR's extremist effort in pursuit of consolidating power by expanding the Court to suit his political needs:

Biden 8/11/1987 on FDR Supreme Court packing (context: Bork nom):
May 1937 "Judiciary Committee was controlled by Democrats all loyal New Dealers. Though they supported FDR political ends, they refused to allow him to pursue them through judicial means. Integrity of the Court..." pic.twitter.com/9R0yuQEOOe

In their minds, the integrity of the Court meant more than the agenda of the president. On June 14th [1937], they issued a report condemning the court-packing plan.  The president's legislation, they concluded, demonstrated the 'futility and absurdity of the devious...an invasion of judicial powers such as has never been attempted before in this country.'  But the committee report went further still.  The executive attempts to dominate the judiciary led to an 'autocratic dominance,' they said. 'The very thing against which the American colonies revolted'...The report concluded with a final, thundering sentence -- before the day was out, that would be heard around the world: '[Court-packing] was a measure that should be so emphatically rejected that its parallel will never again be presented to a free representative of a free people in America.'"

Setting aside the swirl of dishonesty that I've addressed at length, it's quite clear that Joe Biden has believed for decades that court-packing is not merely "boneheaded" silliness that ought to be casually avoided -- but rather a grave, historic, "terrible" error whose advocates would "rue the day" if they ever succeeded. It shouldn't be difficult for him to reiterate this principled position. But right now, he cannot or will not. Think about why. And vote accordingly, especially in crucial 2020 Senate states such as Alabama, Alaska, Arizona, Colorado, Georgia, Iowa, Kansas, Kentucky, Maine, Michigan, Montana, North Carolina, South Carolina, and Texas.