Biden: I Was Against Court Packing Earlier in This Campaign, But Now I Have No Comment 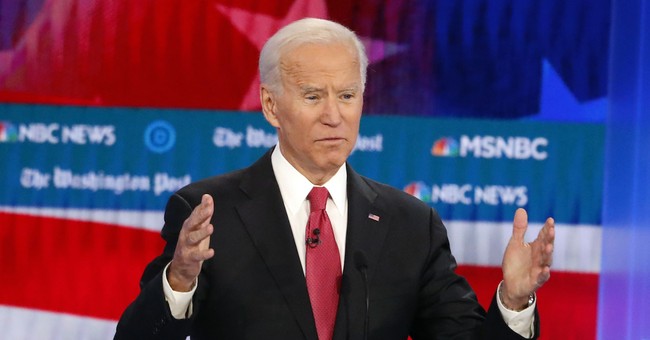 An alarming number of leftists and elected Democrats are resorting to outright threats in order to scuttle a Supreme Court nomination process from moving forward in the wake of Justice Ginsburg's death.  They warn that if Republicans follow through with their absolute constitutionally-prescribed prerogative -- supported by overwhelming historical precedent and recent electoral outcomes -- they will move to fundamentally alter or destroy the norms and institutions they've spent the last four years claiming to protect from Donald Trump.  They claim they'll blow up the legislative filibuster, an action they've adamantly opposed while in the minority.  They'll add new states like DC and Puerto Rico to the union, in order to install additional Democratic Senators.  They'll pack the Supreme Court with new seats, filled by leftist jurists.  Because when they lose under the agreed-upon, existing rules, they declare the rules illegitimate and move to change them.

This is is radical, dangerous stuff, and it should be taken seriously.  Senate Democrats have played the hardest of hardball on judicial nominations for decades now, unilaterally escalating these high-stakes battles in a parade of brazen power-grabs, fueled by situational advantage.  This history is clear and should serve as a warning that their latest fulminations shouldn't automatically be dismissed as idle. Republican Senators and American voters should not succumb to extortive threats.  In fact, to the extent that Democrats vow to exact revenge by slashing and burning norms and institutions, right-leaning voters (including Trump-skeptical or even Trump-hostile) may increasingly consider it a duty to do what is necessary to prevent the opposition party from winning a sweeping victory in November.  This plea from Joe Biden over the weekend should be directed at his own party:

“We need to de-escalate,” Joe Biden says, pleading with the handful of Senate Republicans who could stop a Supreme Court confirmation before the election.

“Don’t go there,” he says. "Cool the flames that have been engulfing our country."

Democrats are the ones who've turned judicial confirmations into rhetorical war zones.  Democrats are the ones who've pioneered new forms of unprecedented obstruction, then eliminated those exact tactics when deployed against their interests.  Democrats are the ones who hit the nuclear button.  Democrats are the ones who absolutely disgraced themselves during the most recent battle over a Supreme Court vacancy.  De-escalation must be signaled and practiced by the aggressors first.  Unilateral GOP disarmament in the face of everything we just rehearsed would be idiotic. Genuine de-escalation would entail Chuck Schumer announcing that if he becomes majority leader, he will not support court-packing, the addition of states, or any other wild power-accruing schemes.  Instead, he held a press conference with AOC at which the pair intoned that 'everything' is on the table, including an insane impeachment process designed to gum up the Senate calendar (McConnell could just table the articles for a period of time, or move for an instant dismissal).  Indeed, if Joe Biden is truly committed to de-escalation, he should forcefully reiterate the position he staked out earlier in this presidential cycle:

From the Oct. 2019 Democratic debate: pic.twitter.com/aNOR7RqAPS

But asked to reiterate his position in Wisconsin yesterday, Biden refused to comment and framed this absolutely central issue as a 'distraction:'

"It’s a legitimate question, but let me tell you why I’m not going answer...it will shift the focus."

"Let’s say I answer...then the whole debate's gonna be about what Biden said or didn’t say.” pic.twitter.com/gvP6TCDPS8

This answer is not acceptable.  The question he's dodging involves perhaps the most important and clarifying litmus test of whether Biden's "return to normalcy" appeal to moderates and even some right-leaning Americans is remotely genuine.  If Biden pledges to stand by his own stance from this election cycle to reject court-packing (another supposed hallmark of his campaign is honesty), then that would take a major and potent attack away from conservatives.  But if he's willing to entertain radical, norm-busting zealotry as 'retribution' for perceived and projected wrongs, but wants to hide the football on that question, that would undermine his calls for de-escalation and crush his normalcy brand.  This is correct:

The more radical Dem rhetoric on SCOTUS becomes, the more they undermine the central rationale for Joe Biden's candidacy -- that he can return the country to something approaching "normal" after the chaos of Trump.

I replied, "and it’s especially galling since they have been lopsidedly responsible for unilateral, escalating judicial power-grabs for decades. They’re not the victims here — the wronged lambs, merely fighting back against Malevolent Mitch. That whole framing is a lie."  The court-packing issue needs to be pressed at the debates.  If packing SCOTUS with a few new seats is on the table, why stop there?  If Democrats add two justices, why not add five as retribution next time?  If we're going to descend into a banana republic, why not have 27 justices, complete with periodic disloyalty purges?  The Court's credibility and authority would be permanently undermined, and not just based on the Left's purely ideological definition of credibility.  And if Democrats try to stack the Senate by adding states, why not respond down the line with new red states, too?  DC has about 700,000 residents.  Ruby red Oklahoma has more than five times that population.  Maybe we need North and South Oklahoma.  Or even four states, and eight Senators, within current Oklahoma.

This would all be madness, of course.  It should be nipped in the bud.  The next, best chance for realistic de-escalation would occur if a Republican Senate were to allow the confirmation of a Biden Supreme Court nominee, should he win in November and a new vacancy arrive after his inauguration.  The nominee should not be blocked.  The nominee should be treated fairly, in a non-circus-like atmosphere.  That's how it should work. But that's not where we are right now, and there's an enormous amount of uncertainty ahead.  But here is what is certain: President Trump and the Senate GOP majority have the right to fill the current vacancy this year.  The constitution, the relevant history, and the last two controlling elections all cut in that direction.  This would not violate the GOP's 2016 Garland precedent, which resulted in the historically-standard outcome of no confirmation when a presidential election year vacancy arises and the White House and Senate are held by opposite parties.  That was normal.  What was not normal was any of this, and especially not this.

Republicans have won elections and wielded the resulting power accordingly, escalating only to meet Democrats' most recent escalation.  Republican Senators should do what needs to be done, and voters -- especially in key states with major Senate races (Alabama, Arizona, Colorado, Georgia, Iowa, Maine, Montana, North Carolina)  -- need to do what it takes to prevent Democrats from being in a position to follow through on their latest threats and schemes.  I'll leave you with this obvious observation about the emotionalist 'dying wish' talking point:

I'm sure if Scalia's dying wish was to overturn Roe v. Wade, the Dems would have gotten right on that <eyeroll> https://t.co/w8ZPnhzxqr

I'll also note that RBG was opposed to court-packing, which seems like the far more important institutionalist argument.

UPDATE - There are a handful of Democratic Senators who are publicly opposed to busting the legislative filibuster, at least for now.  Among them is Dianne Feinstein, she has reaffirmed.  But a word of caution: If people like Chuck Schumer and Lindsey Graham can do backflips to reverse their positions on filling SCOTUS vacancies, do voters want to rely on a small number of Democrats holding the line against potentially intense pressure within their party?

UPDATE II - I addressed this on Fox News earlier: