Pollster: Chaos and Violence in the Streets Is Starting to Break Through as a Campaign Issue 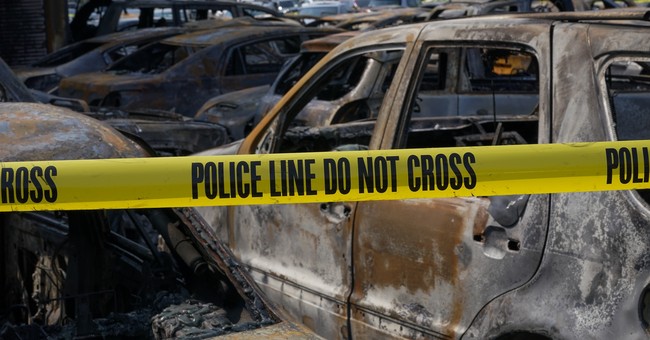 Last week, Democrats made a mistake, in my opinion, by totally ignoring or whitewashing the issue of violent unrest in the streets of American cities. Yes, there have been many peaceful protests, with hundreds of thousands, if not millions, of demonstrators calling for change in the wake of George Floyd's murder at the hands of a former Minneapolis police officer. That is real, that is important, and that reality underscores the need for change (which Congressional Democrats have actively prevented, preferring to maintain a 'live' and potent campaign issue to stoke their base). But there has also been far too much rioting, violence, anarchy, chaos, and looting, undertaken by a not-insignificant percentage of agitators across the country. We've seen ugly, destructive, and even lethal scenes play out across the country, and many "leaders" in government seem unwilling or unable to do what it takes to quell the chaos.

Indeed, some won't even acknowledge it, a denialism that was on full display at the DNC, where virtually every reference to a protest was preceded by the word "peaceful." Republicans will not repeat this error over the next few nights, but they should be careful not to over-correct in the other direction. They should continue to applaud truly peaceful protests and embrace some of the urgent changes that are popular across the board. But there is also some upside in taking a tougher line against criminality, vandalism and violence. And that upside may be growing as disturbing scenes continue to play out on Americans' screens, month after month. National Journal's Josh Kraushaar mines this data nugget:

These days, Democrats are profoundly uncomfortable talking about the rise in violent crime in many major cities. It went unmentioned throughout the four days of their convention, even as it’s growing in importance for many voters. Chicago Mayor Lori Lightfoot spoke in prime time about her work fighting racial injustice—but said nothing about the rioting in downtown Chicago that had dominated her attention the previous week. A recent Pew Research Center survey found that dealing with violent crime is now the fifth-most important issue for votes, with 59 percent listing it as “very important” to their vote in November. For context, it’s nearly as important to Americans as the coronavirus, which ranks fourth with 63 percent listing it as a top issue...if Republicans can talk about the issue in a more resonant manner, it would underscore a critical Democratic vulnerability in November.

And here's a pollster affirming his analysis:

The ongoing violence in American cities is an increasing vulnerability for Dems. It’s popping in my focus groups as well. Americans were originally on the side of protesters. But as the unrest continues, attitudes are shifting. It’s the one R talking point starting to stick. https://t.co/8MauXKhRnP

Again, Republicans could blow this emerging advantage by clobbering it into the ground and convincing even some of those voters who are drifting in their direction on these matters that they are being exploitive, aren't taking legitimate grievances seriously, or are trying to paint all demonstrations with an unfair brush. But with a little finesse, an indictment of the Democrats on this front could be powerful. I'll leave you with these scenes from the swing state of Wisconsin Sunday night, following a police shooting (the man who was shot survived, and officials are trying to determine how justified the shooting was):

Up close look at the car dealership fire set by BLM arsonists in Wisconsin pic.twitter.com/Mv1CC7htiD

Longer clip of the incident in Kenosha, WI involving molotov cocktails and other assaults on police officers. pic.twitter.com/Bmue3koh00

BLM rioters not holding back by vandalizing and looting local businesses here in Wisconsin pic.twitter.com/wzfWq9OlUU

Multiple businesses and government vehicles were set on fire, as was the country courthouse. And the mayhem spilled over into a second night on Monday:

This is not violent rioting in a big blue city. It's in suburban Wisconsin.