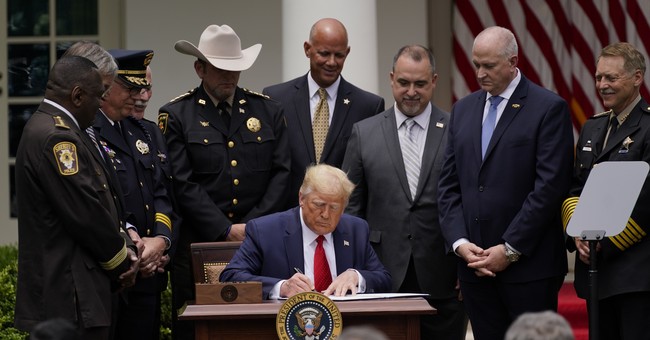 Via our Hot Air cousin Ed Morrissey, this new poll from ABC News is interesting.  We've been following public sentiment beyond pure politics lately, including on overall public satisfaction/dissatisfaction levels, as well as on issues related to protests, policing, and race.  With new cultural skirmishes breaking out, the latest survey asks Americans how they feel about various controversies that are related or adjacent to the national uproar over the killing of George Floyd at the hands of a Minneapolis police officer.  A few key findings:

(1) "Almost two-thirds of Americans (63%) support ‘banning the use of chokeholds by police officers,'" including a supermajority of African-Americans, and even a simple majority of Republicans.

(2) A majority of Americans (56%) oppose ‘changing the names of U.S. military bases that are named after Confederate leaders.’ Independents cut against this idea by nearly 20 points.

(3) Taxpayer reparations for black people remains highly unpopular, with roughly three-quarters of respondents opposed to the idea.  African-Americans break heavily in favor of the idea, but just 14 percent of whites back it.  A slim majority of Democratic leaners back reparations, but the policy is anathema to Republicans (94 percent against) and independents (82 percent against).

What's interesting about this trio of points is that President Trump -- despite receiving low marks on his handling of this over-arching issue -- appears to be solidly in the mainstream of public opinion on all three (which, granted, are hardly comprehensive, given the many cross-currents and complexities involved).  Trump issued an executive order that pushed for the elimination of choke holds, except when an officer's life is at risk.  He has adamantly refused to rename military bases currently named after Confederate figures, despite a GOP-run Senate committee voting the opposite way.  And he's obviously against reparations.  I'd be curious to see some in-depth data on this push by Congressional Democrats:

Speaker Nancy Pelosi on Thursday ordered the removal of four portraits of former House speakers who also served as Confederate leaders, a symbolic step to rid the U.S. Capitol of pro-slavery relics amid a nationwide reckoning over race. Pelosi will join the House clerk to take down the paintings Thursday afternoon, a day before the holiday “Juneteenth,” which marks the day that the last enslaved African Americans in the Confederacy learned of their freedom...Pelosi’s move comes after she again sought to remove nearly a dozen Confederate statues in the Capitol, which have long been criticized by Democrats as glorifying pro-slavery politicians. But under current law, each state decides which statues to send, and Senate Majority Leader Mitch McConnell said last week he would also defer to the states.

Personally, on the military bases and statues question, I have no problem going out of our way not to honor American traitors -- particularly when it comes to literally putting them on pedestals.  I also find this take by Kevin Williamson in National Review to be enjoyable:

How should we think about those Confederate statues and those Confederate names on U.S. military bases? If I were a Republican, I might be very strongly tempted to just sit this one out: If some Democrats want to pull down statues of other Democrats, then that’s a mess in the Democrats’ house. The Republicans might say, “You guys sort this one out. We’ll be over here with Honest Abe.”

The rest of his essay is quite thoughtful, less trolly, and will not appeal to hardcore Trump supporters, but it's worth a read.  A few other trolls that are at least worth flagging involve the role of Nancy Pelosi's father in offering fulsome remarks while dedicating confederate statues in Baltimore years ago, as well as Sen. John Cornyn asking what Democrats intend to do about the statute of former Sen. Robert Byrd, with whom many current members served.

As he notes, Byrd was the Senate Democratic leader...in my lifetime.  This isn't ancient history  He was also a high-ranking KKK official as an adult.  What's the case for keeping his statue in place?  And while most Americans are almost certainly aghast by this sort of iconoclastic destruction, might Democrats struggle to convince a significant portion of their base that tearing down statues of our founding fathers who owned slaves isn't acceptable?

Now members of the NYC Council want the statue of Thomas Jefferson removed. Don’t think for a minute the one in DC is safe either. https://t.co/Jlhv5p7Ffx

Where and what is the red line here?  Does one exist?  Or will the performative insanity continue to play out, flaring up every time the country faces a season of wrenching racial unrest?  I suspect that many of the people who are resisting removing some historical iconography are doing so because they fear -- perhaps rightly -- that there is no line.  I'll leave you with this -- via, um, Popular Mechanics:

We thought you might find these practical science-based tips helpful ?? https://t.co/yDYrq2xyh4