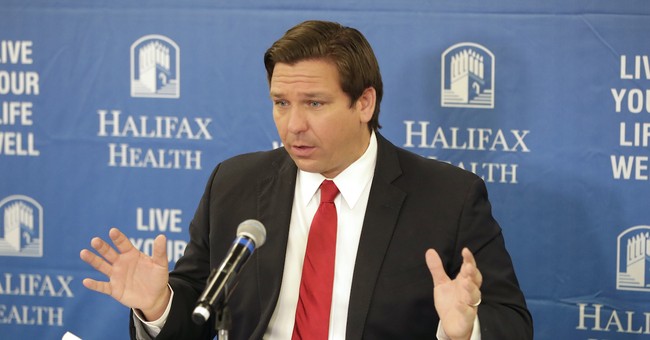 A striking clip that deserves to be seen. Gov. Ron DeSantis, the heretofore extraordinarily popular Republican governor of Florida, has been catching a lot of flak for his handling of the coronavirus crisis. Some of it stemmed from the legitimate concern that he waited too long to shut down mass gatherings of spring breakers early in the outbreak, resulting in the exportation of potentially asymptomatic virus carriers all of the country and world. The failures of the state's unemployment website is also a fair basis for pointed questions. But the criticisms have extended far beyond those issues, with many suggesting that DeSantis' decisions would lead to the unimaginable human suffering associated with a healthcare system being totally overrun.

In response, the governor has laid out a presentation that compared and contrasted some of the dire projections of how hard the Sunshine State would be hit with coronavirus deaths and hospitalizations with the actual data of what has come to pass. This is worth watching:

We need to focus on facts and not fear. They said Florida was going to be just like New York or an “Uber Italy” when it came to hospitalizations and fatalities. This was wrong. It’s time to focus on the facts and follow a safe, smart and step-by-step plan for recovery. pic.twitter.com/tCksZJ05a3

He also made a similar point about the availability of ventilators over the course of his full speech, which he delivered late last week on the subject of his "safe, smart, step-by-step" plan to gradually reopen Florida for business. It may sound like DeSantis is almost dunking on places like New York and Italy for their comparatively gruesome statistics, but that's not his point. His point is that some experts and media outlets predicted that Florida would end up looking like, or even surpassing, those places, in terms of carnage and chaos. That has not happened, and it hasn't even been close. If nothing else, the striking and enormous divergence between the predictions and the real data is a cautionary tale about the reliability of models, and it underscores how profound regional and state-by-state disparities in on-the-ground outcomes underscore the folly of one-size-fits-all policies or mentalities.

Think of the energy with which Northeast-based media outlets wrung their hands about Floridians going to the beach (which the latest science suggests is a relatively safe endeavor these days, with proper distancing and hygiene) while the New York City subway system (an obvious vector for Coronavirus in virtually every way) was up, running, and weren't even getting cleaned daily. DeSantis should be wary of looking like he's taking a premature victory lap, but the data indicate that Florida passed its pandemic peak weeks ago, and has come through the worst of it without anything close to an overwhelmed healthcare system, resulting in mass casualties. That's very good news, and one can hardly blame the governor for wanting to help reassure his constituents by reminding them of what at least some scary headlines and analyses had inaccurately forecast. Meanwhile, the media is doing its best to set a narrative:

NEW: Six months ago, Florida gov. Ron DeSantis was a rising star, talked about as a potential 2024 presidential contender.

Today, he is one of the least popular governors in America.

How the coronavirus undid the young Republican.https://t.co/FOX586EnIE

But recent polling shows that even though it's diminished, DeSantis' job approval rating still stands at a robust +15 at (53/38), and the piece even notes that six-in-ten Floridians approve of his handling of the coronavirus. That may be below governors' national average on the subject, but it's hard to frame either of those numbers as proving DeSantis' unpopularity, let alone that he's been "undone." If his approach to reopening the state goes poorly, his standing could obviously fall significantly. But if it generally works well, again proving critics wrong, his previous strength demonstrates that he's got a lot of room to grow. Health policy expert Avik Roy is defending DeSantis on the substance:

To summarize (for those without @WSJ subscriptions): @GovRonDeSantis restricted visits to nursing homes early on; enabled rural/surburban localities to have different policies than dense, urban ones; and relied on individuals to engage in voluntary physical distancing.

Based on outcomes, the Florida model is working pretty well thus far. Nevertheless, it's hard to argue that America writ large is emerging from the woods on this virus on a smooth or predictable trajectory. There are positive trends, for sure, but even as we've flattened the curve (this piece by Sean Trende is worth your time), cases and deaths have remained stubbornly and tragically high for weeks:

Mitigation clearly flattened curve, which was its primary goal; saved lives, preserved healthcare system. But many expected the plateau to start declining. Yet we've been at a persistent about 30K cases, 2K deaths daily for more than month. These states show the biggest declines. pic.twitter.com/90DMdT3BiZ

It's also noteworthy that Dr. Deborah Birx is still sticking with the sobering 100,000-240,000 White House estimate on fatalities that were unveiled at a memorably grim press briefing in late March. President Trump, having lowered the expected death toll in his rhetoric in recent weeks, is now acknowledging that six figures may indeed end up being the terrible reality nationwide: