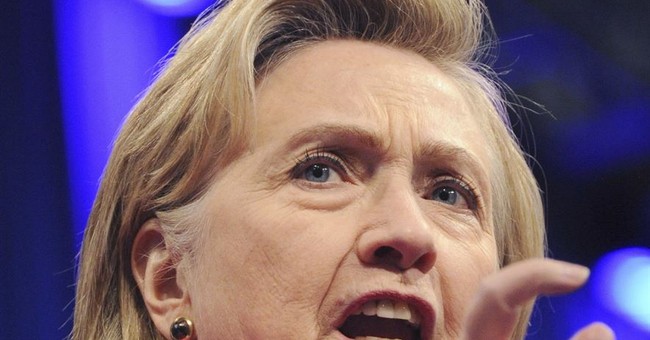 That headline is about as bad as this story gets for Hillary Clinton, as additional emerging details aren't quite as damning as one might suspect -- and there's a Trump tie-in, as well.  We'll begin with the basics.  A California CEO and several others have been charged in a scheme to funnel millions in illegal campaign donations to Hillary Clinton via a Lebanese-American businessman, who showered Clinton with cash until Trump won the election, then scrambled to curry favor with the incoming administration with a major contribution to the president-elect's (shady) inaugural fund.  There's no evidence of wrongdoing on the part of Clinton or Trump connected to this matter. From Tuesday's Justice Department press release:

Earlier today, an indictment was unsealed against the CEO of an online payment processing company, and seven others, charging them with conspiring to make and conceal conduit and excessive campaign contributions, and related offenses, during the U.S. presidential election in 2016 and thereafter. A federal grand jury in the District of Columbia indicted Ahmad “Andy” Khawaja, 48, of Los Angeles, California, on Nov. 7, 2019, along with George Nader, Roy Boulos, Rudy Dekermenjian, Mohammad “Moe” Diab, Rani El-Saadi, Stevan Hill and Thayne Whipple...According to the indictment, from March 2016 through January 2017, Khawaja conspired with Nader to conceal the source of more than $3.5 million in campaign contributions, directed to political committees associated with a candidate for President of the United States in the 2016 election. By design, these contributions appeared to be in the names of Khawaja, his wife, and his company. In reality, they allegedly were funded by Nader. Khawaja and Nader allegedly made these contributions in an effort to gain influence with high-level political figures, including the candidate. As Khawaja and Nader arranged these payments, Nader allegedly reported to an official from a foreign government about his efforts to gain influence.

How do we know the candidate in question was Hillary Clinton?

The indictment release doesn't mention Clinton by name but that's the only candidate Khawaja donated millions to. It's been written about by multiple sources. https://t.co/yu5FLr0wbK

It seems as though Mr. Khawaja was an equal-opportunity access/influence-purchaser, however, as he turned around and showered the Trump inaugural committee with a seven-figure donation after the election.  But what's all this about foreign influence?  And what's the Mueller tie-in?  The reporter quoted above says the evidence suggests that Mr. Nader was in contact with one of two powerful Middle Eastern princes about his pursuit of political influence, one from the United Arab Emirates, and the other from Saudi Arabia.  As for the Mueller component:

CNN reported on his latest child pornography arrest this past summer:

George Aref Nader, who was a key witness in special counsel Robert Mueller's Russia investigation, was arrested on child pornography charges Monday in New York, federal prosecutors announced Monday. Nader was arrested upon arrival at John F. Kennedy International Airport for "transporting visual depictions of minors engaged in sexually explicit conduct." He previously pleaded guilty to the same charge in 1991, the Justice Department said. If convicted, he faces a minimum sentence of 15 years in prison and a maximum of 40 years.

The Associated Press started digging into the campaign finance conspiracy last year.  I'll leave you with with a quasi-snarky question: Weren't Nader, Khawaja et al aware that there was another (dodgy but apparently legal) way to throw piles of cash at the Clintons in exchange for access and coziness?  And wouldn't you know it?  Once Hillary lost the election, that funding stream dried up considerably.  What a coincidence.  Also, could this be a bigger problem for the Clintons?  They're not the only powerful family caught up in the Epstein web.