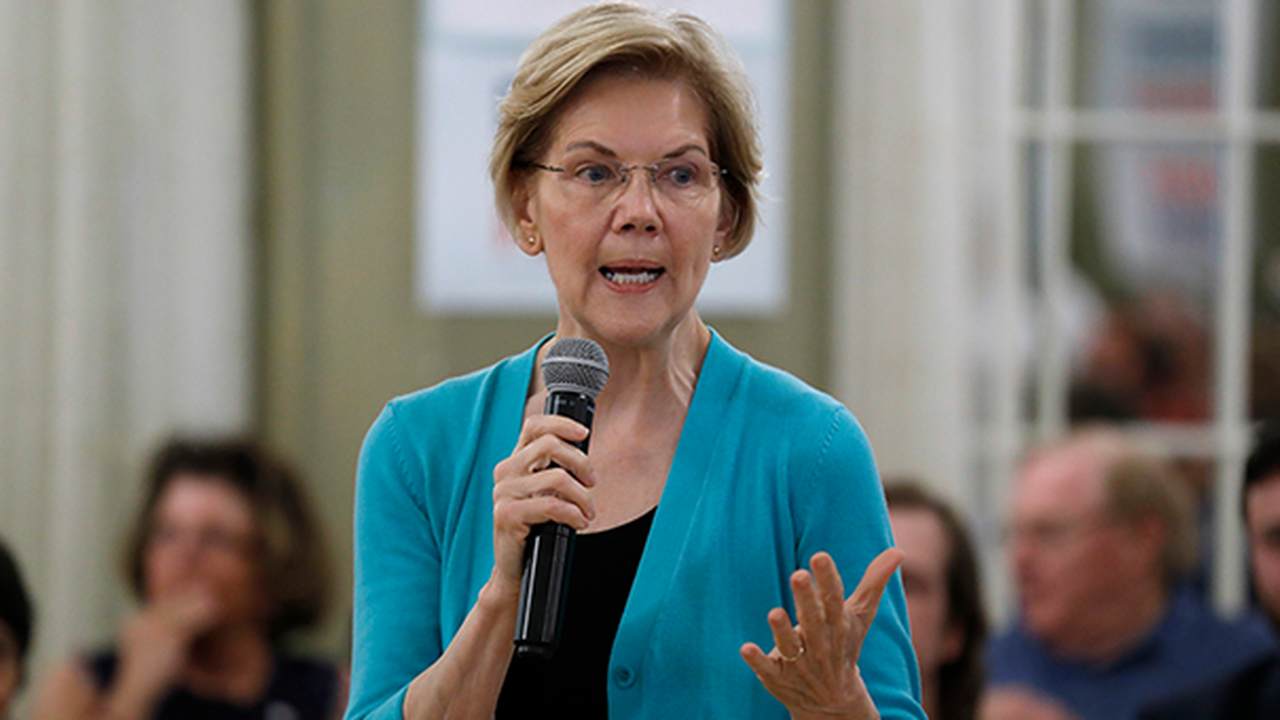 Setting aside her ludicrous policy untruths (for instance, pledging no tax increases for anyone other than billionaires to pay for her gargantuan healthcare program, the total cost of which she's also laughably fabricating), presidential candidate Elizabeth Warren has a lying problem.  For a very specific string of years that coincided with her professional rise into the Ivy League, then abruptly ended after she achieved tenure at Harvard Law (she has no remotely valid explanation for any of this), Warren formally claimed to be a Native American.  She is not a Native American, and never was.  She currently says she still believes that she is a Native American, but is not a member of any tribe, nor a person of color.  It's incoherent.

That infamous episode may represent her most astonishing and dramatic piece of biographical fabulism, but she's also been telling a campaign trail tale in recent days about getting fired from a teaching job for being "visibly pregnant" with her son, decades ago.  Her previous discussions of that period in her life, however, did not include this victimhood anecdote -- and more importantly, the factual paper trail documenting her departure from that school district does not back up her newly-hatched claims, yet she's shamelessly doubled down.  And now, in case you missed it, there's a new fib about her family narrative that she's peddled:

Confronted by a school-choice activist Sen. Elizabeth Warren (D., Mass.) denied sending one of her children to a private school, though her presidential campaign later told the Free Beacon that her son, Alex Warren, did in fact attend private school. Sarah Carpenter, a pro-school choice activist who organized a protest of Warren's Thursday speech in Atlanta, told Warren that she had read news reports indicating the candidate had sent her kids to private school. Though Warren once favored school choice and was an advocate for charter schools, she changed her views while seeking the Democratic presidential nomination. "We are going to have the same choice that you had for your kids because I read that your children went to private schools," Carpenter told Warren when the two met, according to video posted to social media, which was first identified by Corey DeAngelis, director of school choice at Reason Foundation...

Warren denied the claim, telling Carpenter, "My children went to public schools." A school yearbook obtained by the Washington Free Beacon indicates, however, that Warren's son, Alex Warren, attended the Kirby Hall School for at least the 1986-1987 school year, Warren's final year as a professor at the University of Texas at Austin. The college preparatory school is known for its "academically advanced curriculum" and offers small class sizes for students in grades K-12. The yearbook indicates that Alex Warren attended as a fifth grader.

Click through and see the yearbook evidence for yourself.  But wait, there's more:

Senator Elizabeth Warren of Massachusetts told a school choice activist last week that she sent her children to public schools, but new records show her son, Alex Warren, attended private schools in both Austin, Texas and Haverford, Pennsylvania... Warren also sent her son to Haverford School in Pennsylvania, while she was teaching at the University of Pennsylvania. Alex Warren was born in 1976, making him 15 years old when he started at Haverford and 17 years old by the end of his time there. A Haverford alumna, who attended the private school at the same time as Alex Warren, submitted his yearbook picture to The Federalist.

Not long ago, Warren was in favor of school choice, even writing about it in her book, 'The Two-Income Trap.' But now that she's seeking the Democratic nomination for president, she's gone all-in on the teachers unions' adamantly anti-choice agenda. When confronted about her own decision to send one of her children to private school by a pro-school choice activist, she asserted that her kids "went to public schools."  Her children did, in fact, attend public schools for at least some of their K-12 educations.  But as laid out above, her son also spent years in elite private schools.  There is absolutely nothing wrong with that, of course, except for the hypocrisy of it all.  Warren made what she believed was the best decision for her family and was fortunate enough to have the means and opportunity for that decision to include private schools for her son.  She now seeks to close off that very avenue to countless families with less means and fewer opportunities, for her own political gain.

She could have responded to the activist's challenge with a more truthful response, like the one her campaign was eventually forced to put out: "Elizabeth's daughter went to public school. Her son went to public school until 5th grade."  Instead, in the moment, she blurted out something that was not fully accurate, likely knowing that conceding the point that she'd personally made the parental choice to enroll her son in private schools for several years would have inconvenienced her recently-adopted political stance -- especially in the context of debating with a woman representing a community that would be harmed by Warren's preferred policies.  So she opted for an inaccurate blanket statement to temporarily wriggle off the hook, which has been fact-checked and found wanting.

The fact pattern is now quite clear: Throughout her life, Warren has embraced lies, partial-truths and embellishments in order to advance her professional interests, both as an academic and as a politician.  And it seems like nothing -- not her heritage, not her expectant motherhood experiences, and not her children -- is off limits when it comes to violating or shading the truth for her personal benefit.  I'll leave you with this:

Elizabeth Warren’s candidacy is in serious, serious trouble. Bernie just passed her in the national polling average, she’s lost all momentum in IA and NH, she’s dropped from 50% in the betting odds down to 26% in one month, and she’s got nothing left to throw at the wall. pic.twitter.com/D8dFSdELax